The first match of the season for Rohit-led MI team will be against Delhi Capitals on March 24 in Mumbai.

Three-time champions Mumbai Indians are looking good on paper as the 2019 edition of the Indian Premier League (IPL) kicks in. The Men in Blue have been one of the stronger outfits over the years in the tournament history. Albeit they have been tagged as the late bloomers in the league, their might and prowess is not hidden from anyone. No team takes MI lightly, and they are certainly going to be one of the favourites in 2019 as well.

Under the able leadership of Rohit Sharma, the team has struck a good balance in picking up the players for their side this season. Their major concern would, however, lie with the fact of how they utilise their skipper. Their confusion over the batting position of Rohit Sharma has been evident, and the team management would hope that they sort this out early this season. They boast of having the number one T20 bowler in their side, Jasprit Bumrah, and a plethora of match winners to go with him.

The iconic Wankhede Stadium will play the home venue for the Mumbai Indians this season as well. And the sea of blue eagerly awaits for their side to take the field in 7 home matches in the season. The first match of the season for Rohit-led MI team will be against Delhi Capitals on March 24 in Mumbai.

The next game for the team this season would be an away fixture against the Royal Challengers Bangalore in Bengaluru. This will be followed by another away game against the Kings XI Punjab in Mohali, before the team heads back to Mumbai to host the Chennai Super Kings, in what promises to be an enticing contest.

The late bloomers of the tournament would be happy with the fact that the team would finish their league stage matches with two home games this season. They will be hosting Sunrisers Hyderabad on May 2 in their penultimate league game, and then play the hosts to the Kolkata Knight Riders on May 5 in what would be the last league match for the three-time champions.

Here is the complete league stage schedule of the Mumbai Indians: 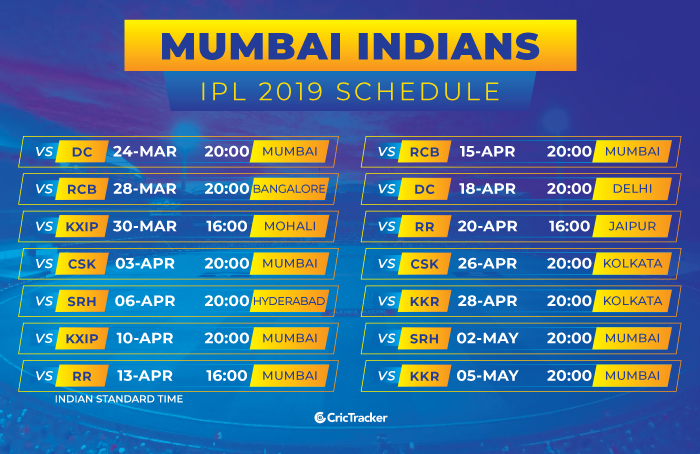