Sunrisers Hyderabad will get to play their all 7 home matches in Hyderabad.

The Sunrisers Hyderabad (SRH) came very close to registering their second title in the IPL history when they made it to the finals last season. They erred on the ultimate day and had to bow down to the Chennai Super Kings (CSK). Despite the defeat, one simply cannot rule out the fact that they were the most consistent side in the league stages of the season. Come 2019, and the Hyderabad camp is set to spread the Orange cheer again.

They thrived under Kane Williamson’s leadership last season, and in 2019, they have the double boost of another leader joining their roster again. Former skipper David Warner is set to make a comeback in the IPL after having missed out on the action last season. With him back in the side, the lineup only looks all the way more formidable than before.

With such calm heads in the fray, the Sunrisers Hyderabad will start their journey in the league stages of IPL 2019 in an away day game against Kolkata Knight Riders of March 24. Four days later, the Orange Army will play their first home encounter of the season at the Rajiv Gandhi International stadium. They will be hosting the Rajasthan Royals. A day later, on March 31, the SRH camp will host the Royal Challengers Bangalore in the Southern Derby.

An away game against the Delhi Capitals would come next for the franchise before they head back home to host the Mumbai Indians. The last home game of the season for the Sunrisers Hyderabad will be against the Kings XI Punjab on April 29. After their last home match, they will have two more away games to play, against Mumbai Indians in Mumbai and against RCB in Bengaluru.

Williamson and Co will get to play their all 7 home matches in Hyderabad. Unlike the previous seasons, when they had to play a few games on adopted home venues, the franchise has got some great news to cheer about this season. The fans in Hyderabad would certainly be delighted about the team’s homecoming.

Here is the complete league stage schedule of the Sunrisers Hyderabad: 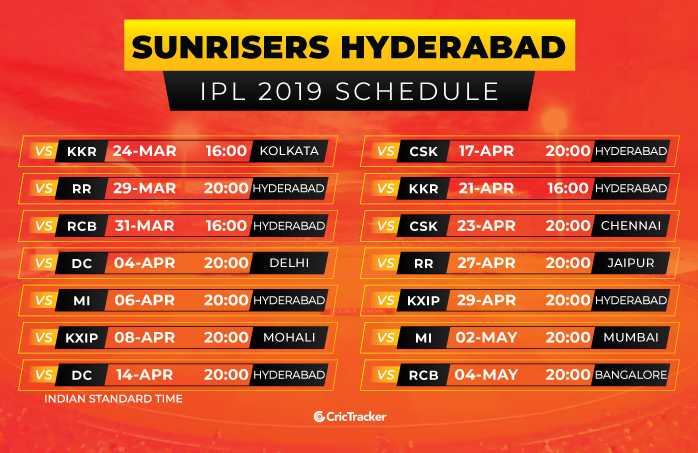