Delhi Capitals made a good start against Mumbai Indians (MI), winning their opening game at the Wankhede Stadium. However, the team, led by Shreyas Iyer, lost by six wickets to defending champions Chennai Super Kings (CSK) at the Feroz Shah Kotla in New Delhi. Their next encounter is against the Kolkata Knight Riders (KKR) at the same venue and would want to make amends.

Last year, the Delhi-franchise beat KKR at the very venue and they can take heart from the victory. On the contrary, KKR are at the top of the points table after their thumping victory against Kings XI Punjab (KXIP) at the Eden Gardens. The hulk-like Andre Russell has turned out to be a brute force and he is one man who can again make a difference and carve the Knight Riders’ third straight triumph.

The eighth game of the IPL between DC and KKR will be hosted by the Feroz Shah Kotla Stadium in New Delhi.

The temperature is expected to be on the higher side with the same hovering around the 30-degree mark. The humidity will be in the 40s. Dew will come into play in the second half of the encounter.

Average first-innings score: 179 from the last 5 night 20-over IPL games 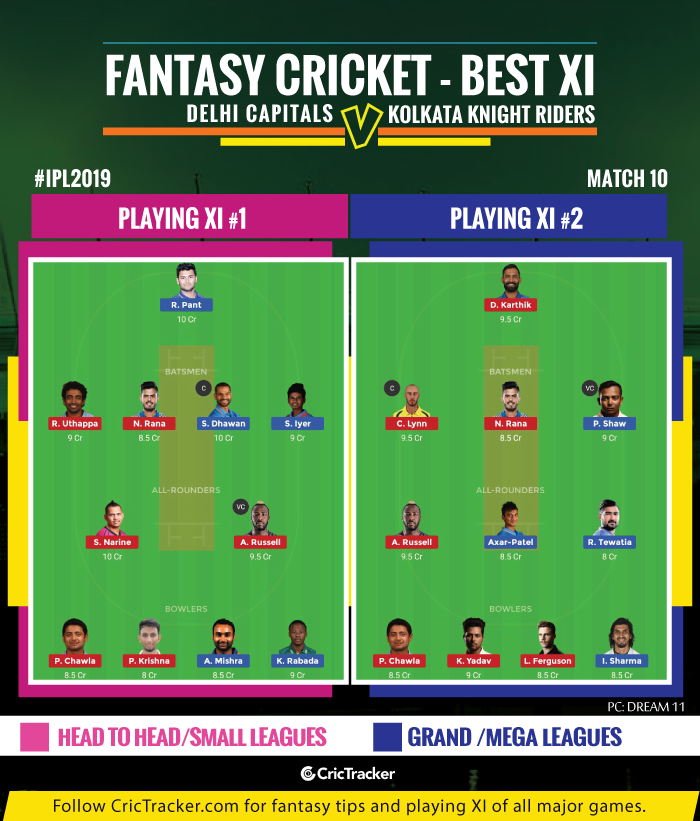 Sunil Narine’s bowling skills are on the wane and he treads a reckless route while batting. Hence, making him the captain and the vice-captain can be a tad risky.

The team batting second is likely to come out trumps.