IPL 2019: Match 10, DC vs KKR, Preview – Can the Capitals counter the wrath of the destructive Andre Russell?

IPL 2019: Match 10, DC vs KKR, Preview – Can the Capitals counter the wrath of the destructive Andre Russell?

The Jamaican has been at his bludgeoning best in this IPL.

Kolkata Knight Riders (KKR) have made a stupendous start to their edition’s Indian Premier League (IPL). The team, captained by Dinesh Karthik, survived narrowly against the Sunrisers Hyderabad (SRH) but came up with a resounding show against the Kings XI Punjab (KXIP) at the Eden Gardens in Kolkata. The hulk-like Jamaican in Andre Russell made the difference in both the games at the iconic venue.

Quite rightly, he was adjudged as the Player of the Match for a couple of thunderous knocks with the bat in hand. He hasn’t flattered to deceive with the leather either, picking up some crucial wickets in the hour of need. The Knight Riders would be looking up to the Windies all-rounder for another match-winning show in their first away match against Delhi Capitals (DC) at the Feroz Shah Kotla in New Delhi.

KKR have a superior record of 5-3 at the Kotla in terms of head to head against DC. Nevertheless, last year, the Men in Gold and Purple were blown away comprehensively and the Capitals would want to draw confidence from that game. The Delhi-franchise made a good start to the IPL with a victory against Mumbai Indians (MI) but lost to defending champions Chennai Super Kings (CSK) at the Kotla itself.

The Capitals may bring in Chris Morris in place of Keemo Paul, who hasn’t done anything of sorts in the two games. Dhawan and Shaw would continue to open the batting with Shreyas Iyer at number three. Rishabh Pant is in jaw-dropping form and he won’t die wondering. A lot would also depend on Colin Ingram. Rabada, Ishant are the pacers with Axar, Amit Mishra and Sandeep Lamichhane being the spinners.

KKR are likely to go unchanged. Chris Lynn and Sunil Narine form the opening pair. Robin Uthappa and Nitish Rana need to carry on with their rich vein of form. Andre Russell will again be key to KKR’s chances in the game. It’s also time for Dinesh Karthik to get a decent score under his belt. Prasidh and Ferguson are the pace-bowling options. Kuldeep, Narine, and Chawla will shoulder the spin department. 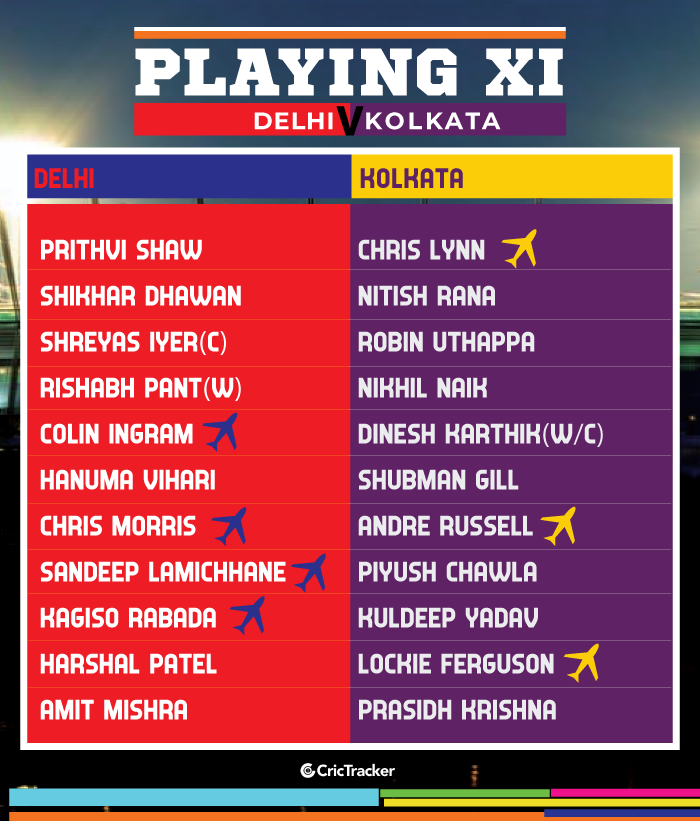 The 24-year-old got off to a couple of starts in the first two games, but couldn’t quite capitalise on them, having scored 16 and 18 respectively. Nevertheless, bearing in mind his potential with the bat, he can’t be ignored by any means. Back in 2018, Iyer raced away to 93 from 40 against the Knights at the very venue and the Capitals would be hoping for their skipper to step up and deliver.

The Trinidadian hasn’t had the best of IPL’s thus far with the ball in hand, having gone wicketless in the first two contests against SRH and KXIP. In the second match, he didn’t complete his quota after being taken for 26 runs in two overs. However, the 30-year-old gave his team a blistering start with a 9-ball 24. Narine is a vital cog in the KKR setup and he would need to perform in the upcoming matches.