RCB's performance with the bat was completely unexpected.

The Sunrisers Hyderabad (SRH) seem to be on a roll at the moment. For two games in a row, they registered scores in excess of 200 and won both the matches handsomely. Jonny Bairstow and David Warner lit up Hyderabad with blistering tons in the game. They beat the heat and batted beautifully to hand over SRH this massive victory.

RCB’s batting performance in this game has raised quite a few question marks. There weren’t any demons in the pitch and it was excellent to bat on. But for the second time in three games, they brought a miserable performance with the bat. With three back-to-back losses, they are planted at the bottom of the points table and have already subjected themselves to huge pressure.

Warner, Bairstow – The first pair to put on three consecutive 100 partnerships in IPL

An absolute carnage followed after RCB put the Sunrisers Hyderabad into bat first. David Warner, Jonny Bairstow went bonkers after the bowlers and left the bowlers clueless. They didn’t take any time to settle in and got going straight away. Warner was the aggressor initially but Bairstow caught up eventually.

Not often would you see David Warner dominated by his partner in a partnership. But here, Jonny Bairstow played unbelievably and the Australian had to take a backfoot. 59 runs came in the powerplay itself and they went on to build up a 185-run partnership – the highest opening partnership in the league. The English batsman reached an IPL century in just three innings, the joint second-fewest innings for any batsman in the IPL along with the likes of Andrew Symonds.

He took just 51 balls to get to his century and was eventually dismissed for 114 runs. He smashed 12 fours and 7 sixes in his innings. Meanwhile, his opening partner got to his century in the final over of the innings and took 54 balls to reach the milestone. Vijay Shankar, who came in at the fall of Bairstow’s wicket, hit a six of the first ball and was run out after scoring 9 off 3 balls. SRH finished with a humungous 231/2 on the board after 20 overs.

Mohammad Nabi breaks the back of RCB

In the chase, the Royal Challengers Bangalore were expected to put up a big fight. However, their batsmen queued to the pavilion one after the other. Mohammad Nabi was lethal with the ball and chipped in with four wickets in his four overs. He only gave away 11 runs and accounted for the wickets of Parthiv Patel, Shimron Hetmyer, AB de Villiers and Shivam Dube.

Virat Kohli, yet again, got out to Sandeep Sharma for the sixth time in the IPL. With this wicket, Sharma joined the likes of Ashish Nehra who also dismissed Kohli six times. In RCB’s top-six, only Parthiv Patel managed to get to the double digits. Though, Colin de Grandhomme came to the rescue. He helped RCB escape the embarrassment with a 37. Moreover, the team managed to go past 100 runs after these efforts. RCB was bowled out for 113 runs in 19.5 overs and lost the match by 118 runs. 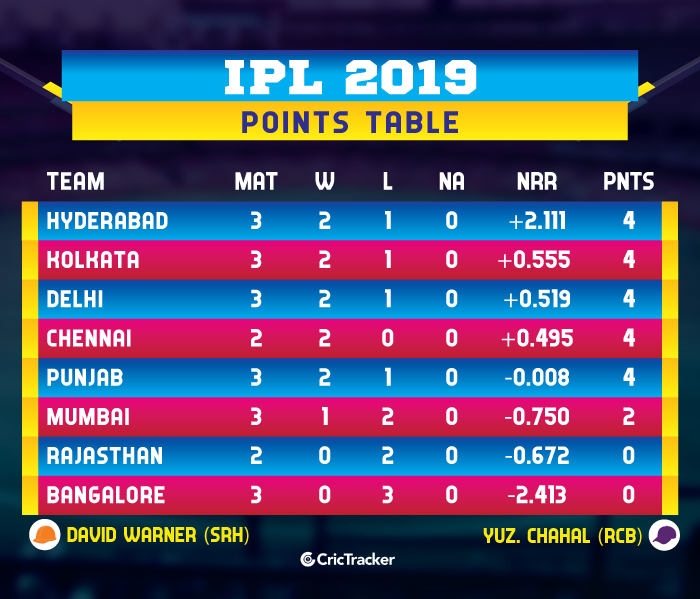