Mumbai is the only team to have troubled the CSK over the years.

The much-awaited clash, rather El-Classico of the Indian Premier League (IPL) is here. The Mumbai Indians (MI) and Chennai Super Kings (CSK) have quite a rivalry between them and they love playing against each other. Moreover, Mumbai is the only team to have a fair bit of lid over the CSK in the history of IPL. The momentum though is with the visitors after winning all their three matches so far.

Mumbai Indians (MI) have blown hot and cold so far and once again have got off to an indifferent start to the season. Rather, the game against their favourite opponents couldn’t have come at a better time for them. They tend to bring out their best against the CSK and will be hoping to do the same at the Wankhede stadium on Wednesday. Rohit Sharma himself is still struggling at the top of the order and it is important that he sets the platform for the batsmen to come.

Chennai Super Kings, more than anything else, would be worried about their bowling. The likes of Ambati Rayudu and Shane Watson haven’t given the team the starts like last season. But still, the strong middle-order has come to the rescue for them. If the top three contributes heavily, they could be an unbeatable team this season. They can’t afford to take the foot off the pedal at any stage during the game against Mumbai.

Jason Behrendorff has joined the Mumbai camp which is a massive boost for their bowling attack. He might walk into the playing XI at the expense of Lasith Malinga who is set to leave for Sri Lanka to play the domestic One-Day tournament. Behrendorff can swing the new ball and trouble the batsmen. The rest of the team might be the same with Kieron Pollard most likely to get another chance.

MS Dhoni might ponder bringing Harbhajan Singh back into the playing XI for Mitchell Santner. He has the experience of playing at the Wankhede stadium having featured for MI previously. The game also brings Rayudu into the spotlight and he would love to get back into the form against his previous franchise. No more changes in the XI are expected unless there are last-minute injuries. 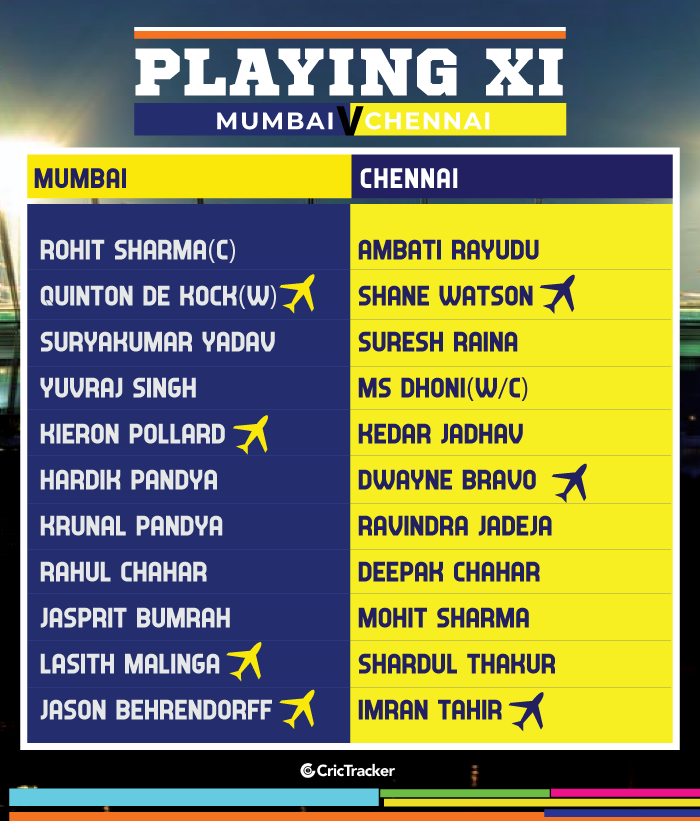 Mayank Markande made his IPL debut against this very team and had run through them in the season opener last year. He has come a long way since then and has also played for India. The leg-spinner troubled most of the CSK batsmen and will be hoping to replicate the same kind of spell at the Wankhede on Wednesday.

Dhoni has trusted Kedar Jadhav at number four this season so far. But he hasn’t really played a match-winning knock. Jadhav should start to muster more runs in the middle overs which will make the job easy for the batsmen to follow. He has either been too slow or has got out early which has put the team in trouble and another failure might lead to Dhoni coming up the order and Jadhav taking up the finisher’s role.

3 – CSK won all 3 games they played in Wankhede last season including the season opener.