In their last meeting in Delhi, the Sunrisers came out trumps by nine wickets.

The Delhi Capitals (DC) have shown sparks of brilliance in this edition’s Indian Premier League (IPL). Yet the franchise, captained by Shreyas Iyer, is hanging in the middle of the points table. The team was oozing confidence after Kagiso Rabada’s incredible show in the super over against the Kolkata Knight Riders (KKR) at the Feroz Shah Kotla in New Delhi that took the hosts over the line in the thriller.

And the victory rubbed off on them positively in the game against Kings XI Punjab (KXIP) as they looked set to get their third victory. But the visitors experienced a shambolic collapse in the death overs as the likes of Mohammed Shami and Sam Curran ran through their middle and lower order. The Capitals are now scheduled to host the Sunrisers Hyderabad (SRH) in tomorrow’s night match at the Kotla.

As far as numbers are concerned, SRH are the favourites in the encounter as they beat Delhi three out of four times at the venue. Moreover, the Sunrisers’ batting has been in red-hot form. David Warner and Jonny Bairstow have got runs with utmost ease and teams have found it difficult to stop their overseas recruits. In their last meeting in Delhi, the Sunrisers came out trumps by nine wickets.

The Capitals may get in Axar Patel in place of Hanuma Vihari, who has batted in the lower-order. Prithvi Shaw and Shikhar Dhawan will open the batting with Shreyas Iyer at number three. The onus would be on Rishabh Pant and Colin Ingram in the middle-order. Chris Morris is the genuine all-rounder. The home team has the spin duo of Lamichhane and Amit Mishra. Khan and Rabada are the fast bowlers.

The Sunrisers are unlikely to change their eleven. David Warner and Jonny Bairstow are the opening batsmen. Vijay Shankar and Manish Pandey are the men in the middle order. Hooda and Pathan’s power-hitting may be required. The likes of Mohammad Nabi and Rashid Khan are no mugs with the bat. They will also need to deliver with the ball. Bhuvneshwar, Sandeep and Kaul are the other bowlers. 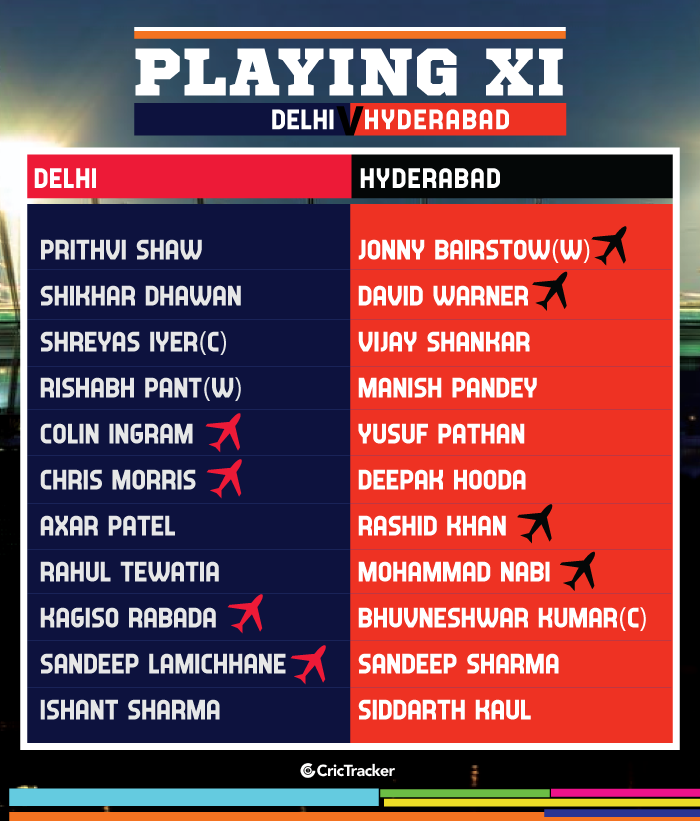 The 21-year-old has a stupendous record at the Kotla and he is in decent enough form in this IPL. Going down the memory lane, the southpaw scored 128 runs from 63 balls with 15 fours and seven sixes against SRH last time around, and would be looking to churn out something similar even this time. The Uttarakhand-born would be facing the same set of Sunrisers’ bowlers.

Dhawan knows the Kotla pitch by the back of his palm as he plays for Delhi in the domestic circuit. The veteran is also in good form of late. Last time, he scored a 92 not out against the Delhi-franchise, playing for the Sunrisers. He must also be aware of the tricks and trade of the SRH bowlers having plied his trade for the Orange Army for quite a few seasons. It goes without saying that SRH need to get him out early.

At the Feroz Shah Kotla