IPL 2019: Match 17, RCB vs KKR, Preview: Will Virat Kohli and Co. finally turn up at the Chinnaswamy?

IPL 2019: Match 17, RCB vs KKR, Preview: Will Virat Kohli and Co. finally turn up at the Chinnaswamy?

KKR is fretting over Sunil Narine's fitness ahead of the match.

So, four matches done and dusted and the Royal Challengers Bangalore (RCB) are yet to get on the board. When did this last happen in the Indian Premier League history? Probably never. Every year the team looks too good before the season and they fall apart when the action begins. Nevertheless, a new day brings new hope and they are facing a tough challenge of the Kolkata Knight Riders (KKR) next up at the Chinnaswamy Stadium.

This is where they came so close to winning the match only to be denied by that controversial no-ball which wasn’t given by the umpire. AB de Villiers played a blinder of a knock and it is about time that the RCB buck themselves up to start winning and that too consistently. Virat Kohli has hinted at making several changes to the line-up already and a few fresh faces without the scars of previous defeats might help as well.

When it comes to the KKR, they like to go about their business and have looked a team to beat much like the Chennai Super Kings (CSK). They lost heartbreakingly to the Delhi Capitals (DC) and are playing after a decent break. Apart from Sunil Narine‘s injury, they literally have nothing to worry about at the moment and it will just be about going through the motions for them.

Marcus Stoinis has to open the batting in the shortest format and it will open up a spot in middle-order. Also, Shimron Hetmyer will be dropped after scores of 0, 5, 9 and 1 in the four outings so far. Washington Sundar may come in along with Nathan Coulter-Nile which will also make the bowling attack looks very much better. In that case, either Umesh Yadav or Navdeep Saini will have to sit out. The latter might be the fall guy with Umesh being preferred due to his experience.

The KKR doesn’t believe in changing the teams much. They are fretting over Narine’s fitness and if he is fit, will walk back into the playing XI at the expense of Nikhil Naik who failed on his KKR debut. If not, then the management might give one more go Nikhil. Lockie Ferguson also hasn’t lived up to the promise and Harry Gurney will be breathing down his neck and that should bring the best out of the Kiwi cricketer.

The pocket-sized dynamo packed a punch in the previous outing and the RCB management will be even more delighted if he remains consistent. Parthiv has often been guilty of throwing his wicket away after the powerplay but against the Rajasthan Royals, he batted well. It will be interesting to see how he approaches this innings at the Chinnaswamy stadium.

Robin Uthappa will be back playing at his home ground and he is seriously a threatening batsman after he gets going. Batting at three, Uthappa has looked in good nick and knows the ground really well. KKR will be hoping that he will bring all the experience of playing in Bangalore together to put the team ahead during the game. If Uthappa clicks, the RCB might lose their fifth game on the trot.

Toss Update: KKR won the toss and opted to field 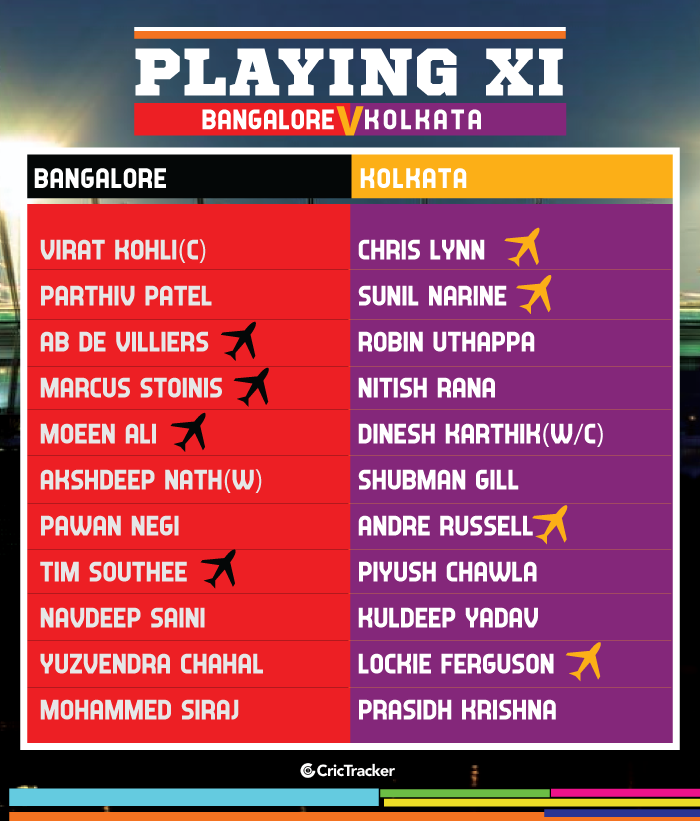