RCB is now almost out of the playoff contention.

Nothing seems to be going right for the Royal Challengers Bangalore (RCB) at the moment. They have now lost their sixth game on the trot and one can consider them to be out of the playoff race. Kagiso Rabada picked up four wickets for the Delhi Capitals (DC) and helped his team win a game against RCB after quite a while.

The home team bowlers did trigger a collapse but it was too late by then. Shreyas Iyer played beautifully for his team. He took complete charge and ensured that he was out there until he got his team inches away from a victory. The Delhi Capitals won the game by 4 wickets.

Virat Kohli anchors the innings but fails to finish well

RCB skipper Virat Kohli flipped the coin in this game but the toss didn’t go in his favour. His side was sent in to bat first and the skipper opened the innings with Parthiv Patel. However, the wicket-keeper failed to deliver for his team after Chris Morris dismissed him for nine. After the heroics in the last match, AB de Villiers also disappointed in this match.

The South African got out for 17 and was deceived by Kagiso Rabada. Virat Kohli played a highly uncharacteristic knock in this match. He never bothered to hit any boundaries in the initial part of his innings and only tried to take the singles. Meanwhile, Marcus Stoinis failed in this game with the willow. After a whirlwind 32 from 18 balls from Moeen Ali, the English all-rounder tried to keep attacking.

But, he missed the googly from Sandeep Lamichhane and was stumped out. Kohli tried to accelerate towards the end. He started well with a couple of boundaries but Kagiso Rabada dismissed him in the 18th over. The skipper could only score 41 off 33 balls and the bowler picked up another two wickets in the same over. RCB couldn’t finish well and only got 149 runs in 20 overs.

Shreyas Iyer leads his team from the front

Prithvi Shaw got the Delhi Capitals off to a flyer in the chase. The 20-year-old took the attack to Tim Southee and smashed him for four consecutive fours and another four came off the fifth delivery as the ball ran away to the fence after the ball clipped Shaw’s pads and ran away to the boundary. However, he slowed down later on and was eventually dismissed after he scored 28 off 22 balls. His partner Shikhar Dhawan, however, got out for a golden duck in the game.

After this, Shreyas Iyer took things under control and led the side from the front. He got some support from Colin Ingram who scored 22 runs. Iyer played a gem of a knock in this game, probably his best of this season. He scored 67 off 50 balls. However, the Capitals lost three quick wickets when they were at a touching distance from a win. But the asking rate wasn’t high at all and Axar Patel finished the game with a four for his team.

Man of the Match: Kagiso Rabada 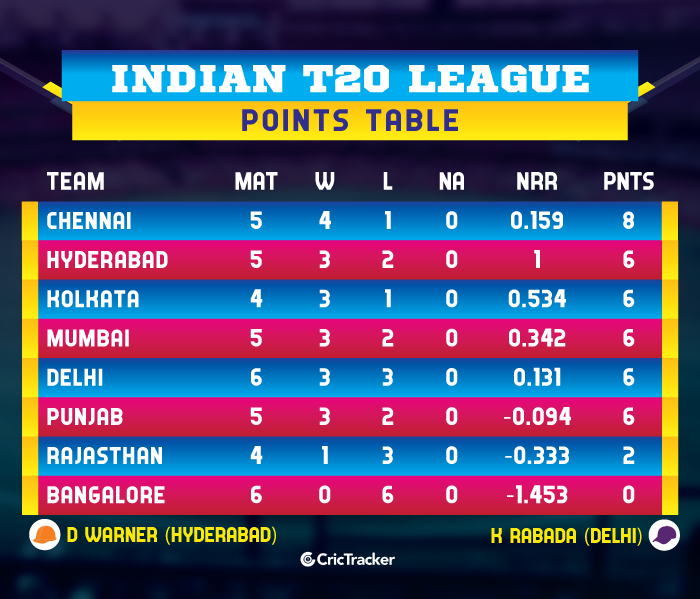