David Warner did a Steve Smith in this game and that might have potentially cost his team the game.

The match between Kings XI Punjab (KXIP) and the Sunrisers Hyderabad (SRH) at the PCA Stadium in Mohali resonated yesterday’s match between RR and KKR. The pitch seemed to be tough in the first innings but ended up being the perfect contrast in the second innings. KL Rahul and Mayank Agarwal, both scored half-centuries in this match and played some exceptional and exemplary cricket.

They had their moments in the match with a few dropped catches going their way. But they did enough so that their team gets over the line. SRH did well to take the game into the last over but failed to defend the target. The Sunrisers have now lost two games in a row as they struggled to handle the dew in the second innings. Punjab have now got 8 points to their tally and find themselves a spot in the top half of the points table.

Bhuvneshwar Kumar and co. were asked to bat first in Mohali. It was a very good toss to win for KXIP as the pitch quickened up in the second innings with the dew coming in. Jonny Bairstow bagged back-to-back failures and fell yet again to a leg-spinner in this match. Mujeeb Ur Rahman dismissed him for just 1 run off 6 balls.

After the English cricketer fell, David Warner and Vijay Shankar played extremely sluggish knocks. They hardly got any boundaries during the powerplay and the Tamil Nadu cricketer was the first to get out. Ravichandran Ashwin unveiled one of his variations and bowled an outswinger. Mohammad Nabi batted at four in this match.

However, he was unlucky with the way he got out. Warner smashed one straight to Ashwin and the off-spinner didn’t well to stop that. Nabi backed up too much and was run out. While Manish Pandey scored 19 off 15 balls, Deepak Hooda finished off the innings well for SRH with 14 off 3 balls. Warner remained unbeaten on 70 off 62 balls as SRH finished with exactly 150 runs on the board.

KL Rahul and Mayank Agarwal do the job

Chris Gayle played the one way he knows in this match. He smoked a six and a four before he holed out at long-on off the bowling of Rashid Khan. After he fell, KL Rahul and Mayank Agarwal ensured that they didn’t lose a wicket for a long interval. They piled up 114 runs together and both got past their respective half-centuries.

The stage was set for them to take the team over the line. But Mayank got out for 55 runs when his team was just 19 runs shy of a win. Soon, David Miller also got out in the same over for 1 run. These two wickets got SRH right back into the game. Sandeep Sharma and Siddarth Kaul bowled brilliant 18th and 19th overs. KXIP needed 11 runs to win the game and SRH had no other option but to bowl Nabi in the final over. The ball wasn’t gripping in extreme wet conditions and he failed to defend it.

Player of the Match: KL Rahul 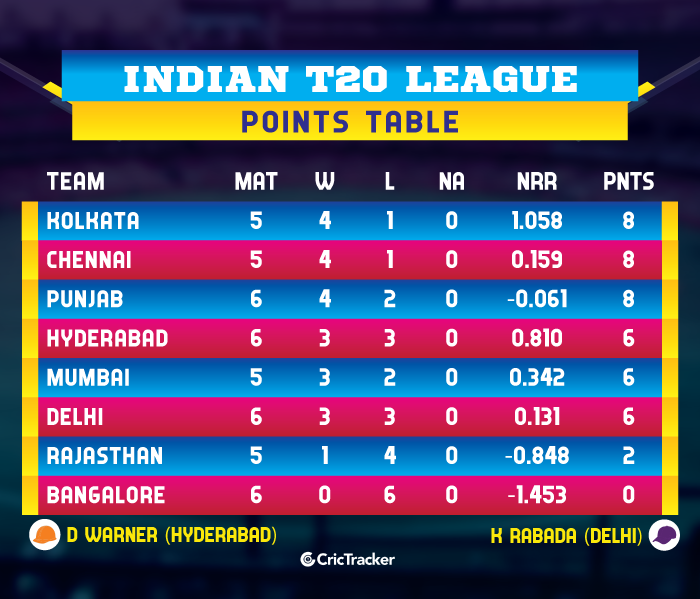