It has been a boomerang effect for Chennai Super Kings to climb up the points table. In the previous match against KXIP, the Men in Yellow were placed third, defeated the visitors to take second spot. Now, the IPL heavyweights are out to exact revenge for the loss in the last season against Kolkata Knight Riders. The sturdy home side has been taking on the better side (based on points) and is successfully invading their opponent space.

The Kolkata juggernauts have won four of the five matches they played so far and so did Super Kings. They both sit on the same points with the same number of wins but with a bit of run rate difference, thus KKR is top ranked. Interestingly, this season both the teams lost one match against the lowly lying teams. Knight Riders lost to Delhi Capitals in a nerve-wracking Super Over while the South superstars lost to Mumbai Indians in by far their worst losses.

CSK has upped the ante, in the previous match, to plug in the holes which were dug by the Mumbai’s side. On the blip side, for the purple outfits, it has been a one-man show throughout. Well, the name is Andre Russell, who was adjudged Man of the Match thrice in five matches, where he batted for four innings. Against Rajasthan Royals, the Knight Riders top order wrapped up the match, deciding not to trouble Russell. The clash between CSK and KKR will be an interesting game because the two most consistent teams in the tournament are locking horns.

It’s been a successful combination for CSK in the previous match, so the Dhoni-man will go with the same team against the top-ranked Knight Riders. The comeback man Du Plessis has played significantly good innings by scoring 54 off 38 balls in the previous match. He extended the team total to a fighting score. Its high time Ambati Rayudu pull up socks and work towards his dull glimmer of form.

For Knight Riders, it has been a good tournament so far but their pace attack still has a glitch. Shrikant Mundhe will replace Prasidh Krishna, who could only bag one wicket in the four matches. All-rounder Shrikant can give a boost to the middle order. 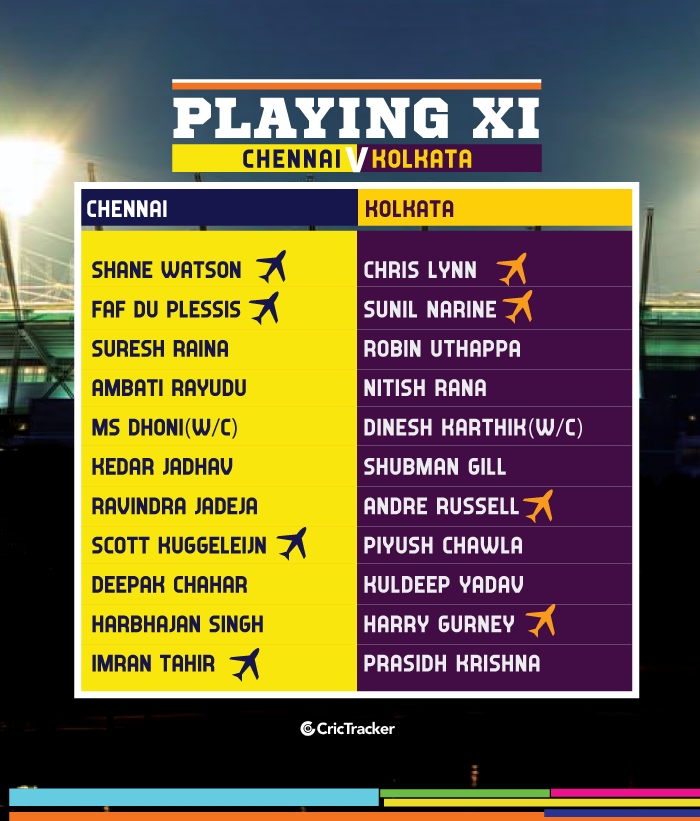 The definition of Mr dependable seems to be stolen from captain cool’s dictionary. It maybe an instance of Deepak Chahar’s over, when the wicketkeeper-batsman lashed out after the pacer gave away two back-to-back no balls in a crucial moment in the previous match. Then, the CSK quick went on to restrict the opponent’s batters to give only four runs that over. The veteran’s sensibility and understanding of the match situation make him most valuable.

The most valuable player of the team will have to be focused on. Russell, who has been outstanding so far is plying the trade with his willow on a different level this season. With one half-century and three near-miss 50s, Russell seems to break most of the records this season if he continues to keep up his form.