IPL 2019: Match 29, KKR vs CSK, Preview - Unsettled Knight Riders hope to pull one back on the table-toppers

IPL 2019: Match 29, KKR vs CSK, Preview – Unsettled Knight Riders hope to pull one back on the table-toppers

CSK are at the top of the points table with six wins from seven matches.

The clash of the heavyweights is once again here for the second time in five days. While the game between these two teams earlier this week turned out to be a damp squib, it will surely live up to the expectations at the Eden Gardens it seems. The Chennai Super Kings (CSK) are once again on a winning spree which is not a surprise while the Kolkata Knight Riders (KKR) have suddenly lost their touch and ended on the losing side in the previous two matches.

Dinesh Karthik was disappointed with the bowling attack after the game against the Delhi Capitals (DC) and will be hoping for a better effort from them. The batting has not clicked either for the KKR and the likes of Robin Uthappa and Nitish Rana including the skipper should take up the onus of scoring more runs. They are depending a lot on Andre Russell and the Caribbean might miss out on this game as he walked off the field the other day after bowling three overs.

CSK, on the other hand, have played some superb cricket despite their top order being strangely out of form. Shane Watson and Suresh Raina haven’t played to their full potential yet while the skipper MS Dhoni has just done enough every time for his team to win. Most importantly, every time, the team is in trouble someone or the other has put their hand up for CSK to win the game for them.

Though the changes didn’t work for the home team against the Capitals KKR are expected to go in with an unchanged side. Joe Denly got a snorter first up from Ishant Sharma and deserves another chance this time. Lockie Ferguson and Carlos Brathwaite also might play again but they will have to prove their mettle. Andre Russell can get fit just in time for the match but is KKR management putting too much pressure on him in terms of responsibility?

MS Dhoni spoke about making a few changes according to conditions in Kolkata after their previous match. Harbhajan Singh might come in then for Mitchell Santner while Scott Kuggeleijn should also return at the expense of Shardul Thakur. While Shane Watson is not at all looking comfortable in the middle this season, Sam Billings could be given a go at the top.

Toss Update: CSK won the toss and opted to bowl 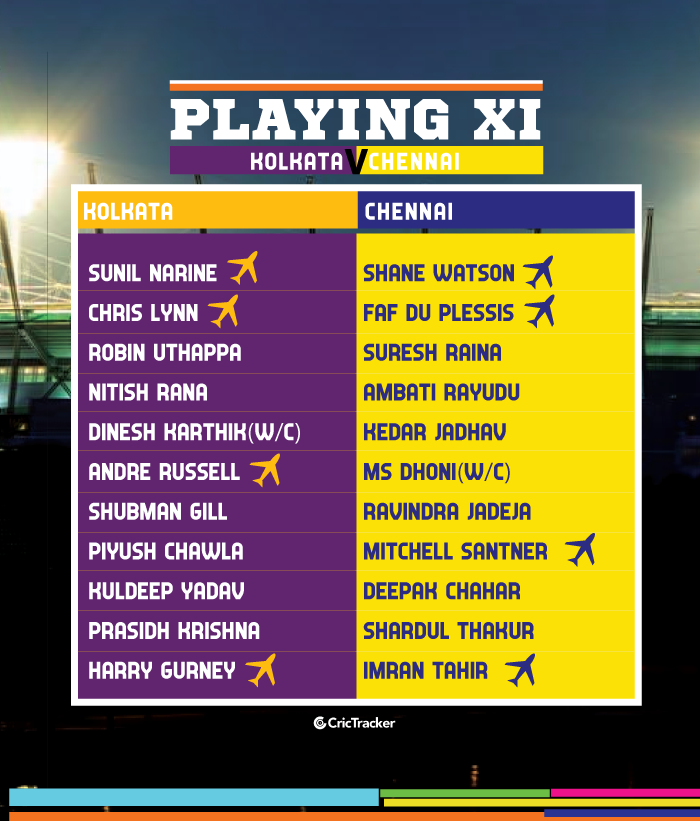 He is definitely one of the supremely talented players in the country at the moment. When the fans were waiting for Russell mania to unleash, Gill just eased his way towards a half-century. His 65 were better than Russell’s 45 on the day and the youngster might have sealed his spot as an opener. With Chris Lynn and Sunil Narine, Gill doing well must’ve relived the KKR management.

This is not Mr IPL. Suresh Raina is having a strange season. He is going for shots too early in this innings and is getting out. Though one can argue that he has got out to some spectacular catches in the outfield so far. CSK’s all-time number three has so far mustered only 136 runs in seven innings and is yet to play a match-winning knock for his team.