Pick as many spinners as you can in your fantasy team. 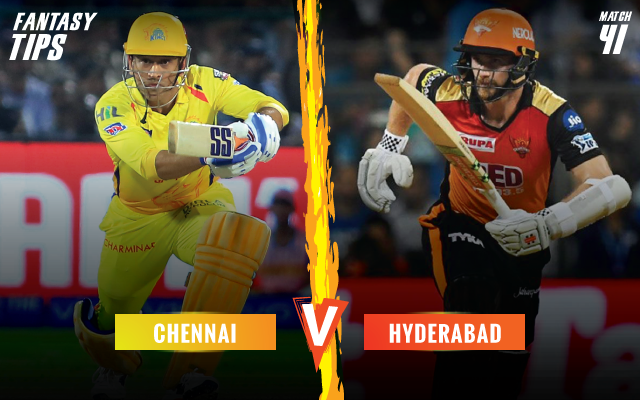 After being involved in a thriller against the Royal Challengers Bangalore (RCB), the Chennai Super Kings (CSK) fly back home to face the Sunrisers Hyderabad (SRH) at the Chepauk. Though MS Dhoni won the hearts of his fans with a gigantic knock of 84 runs, the one-run loss would hurt the Men in Yellow. They still need one more win to qualify for the playoffs and will feel better playing at home for the first time in last two weeks.

CSK have gone with Harbhajan Singh while playing in Chennai this season and the trend might continue for this game as well. Shardul Thakur isn’t doing enough despite being backed by the skipper time and again. He should make way for Bhajji in the line-up. SRH, on the other hand, have found their mojo at the right time and would love to make it a hat-trick of victories. They are expected to go in unchanged for this encounter.

The 41st game of the IPL between CSK and SRH will be hosted by the MA Chidambaram stadium in Chennai.

It is generally extremely humid in Chennai and it won’t be any different on Tuesday. The temperature will hover around 30 degrees Celsius and the dew will play an important role during the match. There is no rain forecast.

The Chepauk pitch perfectly suits the home team. The ball turns a lot at the venue and with dew coming in later in the evening, teams generally opt to chase. Interestingly, in this season, CSK has won despite batting first.

Dwayne Bravo is fit and played the previous game.

Jonny Bairstow will be playing his final game this season for SRH. After this match, he will join England team ahead of the Pakistan series and World Cup.

Pick as many spinners as you can in the Fantasy team as the Chepauk pitch tends to turn a lot.

CSK are unbeaten this season at home in four matches and they might continue their winning run at the venue.