RCB won the previous face-off. Who will win this time?

The Royal Challengers Bangalore (RCB) look rejuvenated after two consecutive victories and somehow are still alive in the ongoing Indian Premier League (IPL). But they can’t take their foot off the pedal. RCB still need to win their remaining four matches to have any chance of qualifying for the playoffs. Their next challenge is Kings XI Punjab (KXIP) whom they defeated by eight wickets in the previous face off.

The Ravi Ashwin-led side is at the fifth position at the moment with 10 points to their name and will be looking to climb up the ladder with a win in this game. They’ve made frequent changes to their line-up according to the conditions and the trend is likely to continue at the Chinnaswamy stadium as well. It will be a tough task for the visitors to go past RCB who are playing their best cricket of the season.

Virat Kohli understands the importance of every game and will be urging his boys to take one match at a time. He has time and again spoken about enjoying out in the middle, and with less pressure, the players are doing the same. Players apart from AB de Villiers and Kohli stepping up have turned their fortunes around and another decent effort is likely to make a hat-trick of victories for RCB.

The pitch at the Chinnaswamy stadium is generally known to be a flat one. But the new ball swung a bit during the game between RCB and CSK and that was crucial upfront. If that isn’t the case this time, the 200-run mark might get breached.

The weather has cooled down a bit in Bengaluru after a few showers last week and it is expected to be a pleasant evening at the Chinnaswamy stadium. The temperature will hover around 27-28 Degrees Celsius during the match and the dew is expected to play its part which has become a norm now.

RCB is unlikely to tinker much with the winning combination. Moeen Ali will be playing his last game after which he won’t be available. Umesh Yadav and Mohammed Siraj have got enough chances but both the bowlers have been expensive. Kulwant Khejroliya, the left-arm seamer, might play this match after warming the bench for the whole season so far.

Ravi Ashwin has been quite unpredictable and irrespective of the result of the previous match, he has made changes to the side quite often. But with the tournament entering its business end, the experimenting might be stopped and KXIP might go into this game unchanged. Having said that, Sarfaraz Khan can come into the contention to strengthen the batting a bit.

The prediction is for the chasing team to have the upper hand in the game. 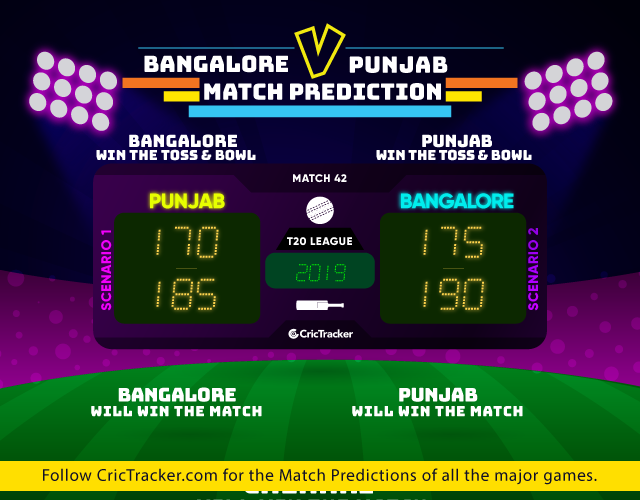