With a win on Thursday, MI can confirm their place in the top four alongside CSK and DC.

Just the way it happens pretty much every season, it took almost 50 games for one team to legitimately get knocked out of the tournament. That’s the beauty of the Indian Premier League (IPL), where there’s no superior nor any inferior when we look at the squads. However, form is a crucial factor which influences where teams stand in the points table.

As far as that is concerned, the Sunrisers Hyderabad have been struggling to keep one momentum intact. Their tournament thus far comprises of mixed emotions, of great highs and sorrowful lows, which keeps them just about hanging in pursuit for a playoffs spot. Having said that, they are slightly ahead of KKR and Kings XI Punjab in the chase.

Mumbai Indians, on the other side, have been terrific in the middle phase of the tournament, registering some very crucial wins. With the likes of Hardik Pandya and Kieron Pollard in devastating form, they are a threat to any team. With a win on Thursday, they can confirm their place in the top four alongside CSK and DC.

There is no real reason why Mumbai should make a change in their batting department, from the openers Rohit Sharma and Quinton de Kock to Suryakumar Yadav and their all-rounders/big-hitters Krunal Pandya, Kieron Pollard and Hardik Pandya have all contributed at different occasions. Hardik in the middle and lower order with his smashing form is their best bet while batting first as well as in a chase.

The bowlers all of them including Jasprit Bumrah were taken to the cleaners in the previous outing against Kolkata. However, even in a game where KKR scored 232 runs batting first Rahul Chahar, the young leg-spinner showed a lot of character and will make life difficult for SRH batsmen as well.

There’s a void, a huge void and then there is Sunrisers Hyderabad without David Warner in the XI. He was with SRH just to play the 12 matches and amassed 692 runs, holds the Orange Cap and should end at the top. Martin Guptill comes in his place and the Kiwi will open with Wriddhiman Saha. Manish Pandey’s batting form is a huge plus for the Sunrisers while they will want Kane Williamson to come to the party real soon.

Vijay Shankar, Rashid Khan and Mohammad Nabi have dual roles to play and come good at it all. The bowling department has been a real let down for SRH as both their star bowlers Rashid and Bhuvneshwar Kumar haven’t got the wickets. In fact, in a few matches, has even been taken to the cleaners. Khaleel Ahmed and Sandeep Sharma have to rise up above ordinary as well. 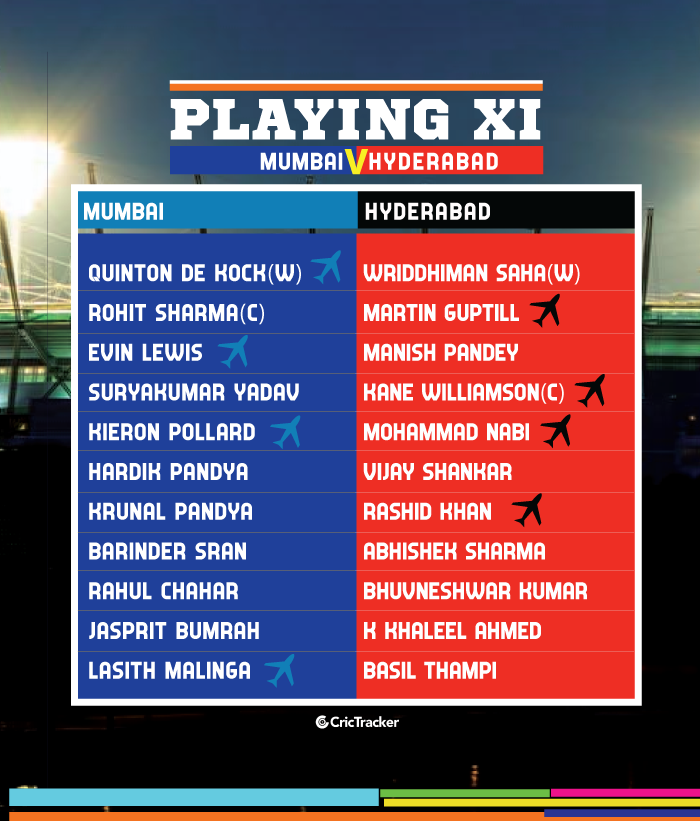 The stupendous speedster had a rare off-day at the Eden Gardens, which unfortunately came at the peril of MI. Despite being a very strong unit, Mumbai is capable of leaking runs profusely, which makes them vulnerable. Bumrah needs to bring out his A game to add some solidity to their side. The 25-year-old is most certainly Mumbai’s most important bowler and he has a huge job in hand to confirm the side’s playoffs spot.

With the explosive David Warner flying back to Australia, all eyes will be on skipper Kane Williamson to replicate his heroics from 2018. In the absence of Warner, he amassed over 700 runs and collected the Orange Cap and now, he has been struggling for runs. Williamson is a different player when he has responsibility on his shoulders and SRH will be keen to see some fireworks from his bat.

6.19 – Rashid Khan has the best economy for any bowler this season who bowled more than 25 overs.