RCB won the last encounter between the two teams in Bengaluru.

The seventh match of the ongoing Indian Premier League (IPL) will see the Royal Challengers Bangalore (RCB) hosting the three-time champions Mumbai Indians (MI). The visitors though have once again got off to an indifferent start losing their opening game to the Delhi Capitals. Even the Virat Kohli-led RCB have a lot of problems to ponder after their capitulation for 70 against the CSK on a treacherous surface at the Chepauk.

Already a lot is at stake for both the teams having lost their respective opening matches. They endured poor season last year and another loss could start putting doubts in their minds about the playoff qualification. Mumbai especially will be under pressure as they conceded a mammoth 213 in front of their home crowd. Their bowling needs an immense improvement and though Jasprit Bumrah is fit the others also will have to step up to arrest the run-scoring.

On the other hand, a massive improvement in the batting department is the must for the home team. They should’ve assessed the pitch in Chennai better before going for big shots and should’ve played according to the situation. Though one has to credit to their bowling attack who almost made a match out of the meagre total. Backing from the massive crowd might also help the RCB in this game and the stage is set for their superstars to make amends.

Virat Kohli and Parthiv Patel will continue to open the innings with Moeen Ali and De Villiers follow them next. Shimron Hetmyer was unlucky to get run-out on his IPL debut and will be eyeing to score big this time around. Shivam Dube is also a better all-rounder and should be given some time to settle down in this team. Tim Southee is likely to come back to bolster the bowling attack with Siraj, Umesh and Saini to support him. Chahal along with Ali will look after the spin bowling department.

Rohit Sharma and Quinton de Kock are the openers for the visitors with Suryakumar Yadav coming in to bat at three. Yuvraj Singh is in great form and Pollard too looked in good nick against the DC. Hardik Pandya, as the lead all-rounder, has to put up a better show. His brother Krunal did a good job with both bat and ball and will be itching to bowl at AB de Villiers again.

Mayank Markande is likely to come in for the young Rasikh Salam for this encounter with Jasprit Bumrah also most likely to play following his injury in the previous game. 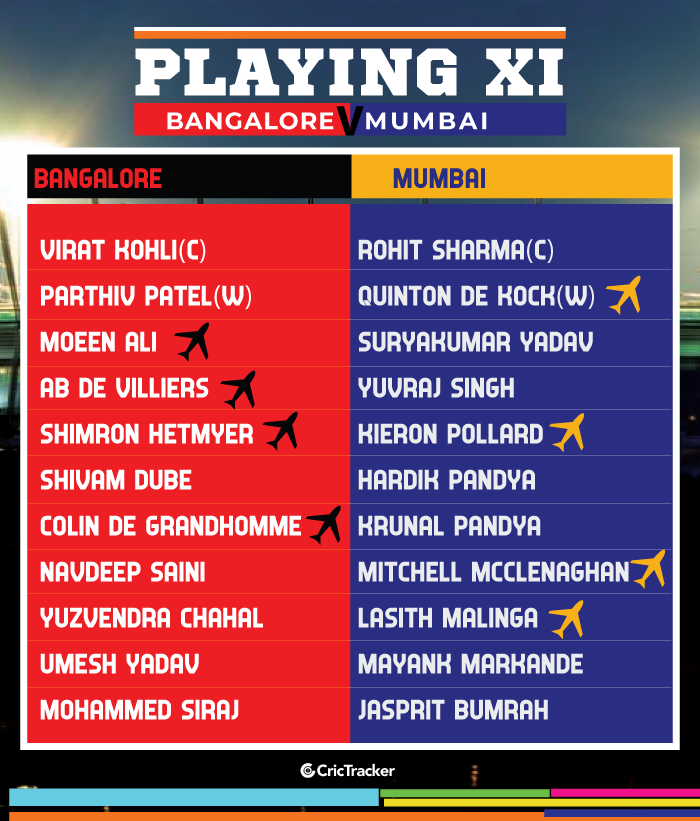 AB de Villiers was dropped once by Imran Tahir in the last game but he failed to capitalise on it. But the Chinnaswamy stadium more often than not brings the best out of him and he will be aiming to go big in the game. Depending on the situation, the South African will bat at three or four and no wonder, the battle between him and Krunal Pandya will be the one to watch out for.

De Kock looked in decent touch during his brief stay at the Wankhede stadium. Moreover, he will be playing against the team whom he represented last year and a good score from the Proteas batsman will surely hurt the RCB. De Kock has pummeled runs in the preceding Sri Lanka series back home and Mumbai will be hoping for him to replicate the similar kind of form.

Here’s our video preview of the game: