KL Rahul announces himself in the tournament with a match-winning knock.

After the upset against KKR in their last game, Kings XI Punjab (KXIP) made a strong comeback in their home game against Mumbai Indians (MI). KL Rahul and Murugan Ashwin were the star performers for the home team in the match and did really well. Mayank Agarwal also played an aggressive cameo and contributed a massive part in the win.

Mumbai Indians, after starting well, failed to finish well with the bat. Except for Rohit Sharma, Quinton de Kock and Hardik Pandya, no one else really got going. They didn’t get to a par total on a high-scoring ground and the bowlers had very little to defend. Mumbai Indians lost the match by 8 wickets.

Quinton de Kock takes the bowlers to the cleaners

Mumbai Indians, after being put into bat, got off to a flyer courtesy the brilliance of their openers. While Rohit Sharma usually takes some time to settle in, he didn’t waste any balls this time. He got going right from the start and scored 32 off 18 balls before Hardus Viljoen struck him on the pads and dismissed him LBW. However, the Mumbai skipper was not out as the ball went down leg and missed the stumps.

But, he didn’t opt to take the DRS and walked back to the pavilion. Soon, Suryakumar Yadav also tried to play across and line and was trapped in front of the stumps by Murugan Ashwin. Quinton de Kock, though, played aggressive cricket and didn’t bother much about what was happening at the other end. He smashed 60 runs off 39 balls and put the team in a very good position.

Hardik Pandya played a good cameo yet again towards the end. He took 19 balls to score 31 runs and was looking good. But he got at the wrong time and Punjab managed to pull things back beautifully. MI was looking for a score around 190 or 200 at one stage. However, they could only get 176 runs which was a below-par total.

In the chase, Punjab started very slow. KL Rahul hardly got going in the initial part of his innings and struggled to hit the ball well. However, just when the pressure was building up, Chris Gayle broke free. He smashed four humungous sixes and looked dangerous. After he scored 40 runs off 24 balls, Krunal Pandya dismissed him just at the right time.

After he fell, Mayank Agarwal came in and played a very aggressive knock. In just 21 balls, he scored 43 runs and took the pressure off his partner, KL Rahul. The 28-year-old hit one straight back into the hands of Krunal Pandya and got out. Rahul, after all the initial struggles, did extremely well towards the end and hit some valuable runs off the bowling of Jasprit Bumrah. He remained unbeaten on 71 runs as KXIP sailed through to an 8-wicket win in overs.

Man of the Match: KL Rahul 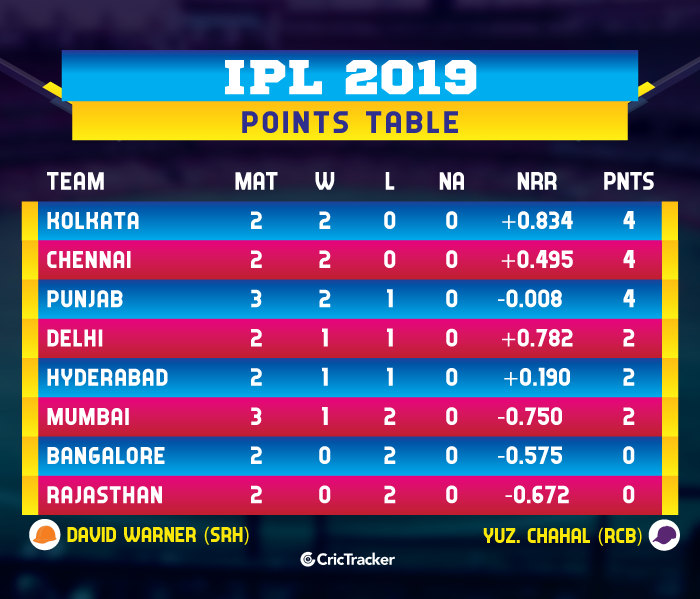