Both Kings XI Punjab and Kolkata Knight Riders get to play three matches in this round.

The first two rounds of the Indian Premier League (IPL) official championship fantasy league were dominated by big performing all-rounders and overseas batsmen. Some star Indian players can be considered to have underperformed given the expectations over them ahead of the tournament. The upcoming 3rd round will have three matches to be played by the Kolkata Knight Riders and Kings XI Punjab respectively. The focus will be on the players of those two teams who get an extra game compared to the remaining six.

Round 3 schedule – KKR and KXIP to play three matches each while DC and RR play one. All the remaining four teams will play two matches apiece.

KL Rahul is slowly getting into his groove and has to be considered from the keeper category for the 3rd round given the extra game in hand. Jonny Bairstow has been impressive scoring 40+ in all four matches and should be picked as one of the two keepers. Buttler and Pant have only one game during this round. MI’s reluctance of picking Yuvraj Singh over Ishan Kishan is costing the team in crucial phases of the innings. The youngster could be a useful picking for the fantasy teams as he costs only 8.5 credits.

Virat Kohli’s recent record against spinners is a worrying thing. He will be facing KKR and DC in this round, both the teams have a good number of spinners in their attack. Rohit Sharma looked in glorious touch against RCB and KXIP but his failure in converting the starts is not really enough for his price of 10.5 credits. Sarfaraz Khan is gold dust as he is valued at only 6.5 credits and will be batting at No.4 for three matches during this round.

Shikhar Dhawan and AB de Villiers have been scratchy in the first two matches. As a result, the likes of David Warner, Robin Uthappa and Suryakumar Yadav will be the trustable trio in the batsmen category. Warner is the orange cap holder while Uthappa and Surya played a couple of good knocks thus far. Nitish Rana will also be more than a handy pick as he costs only 8.5 credits.

Andre Russell and Hardik Pandya had three good matches with the bat so far. Both the devastating players are good at making most in all the departments. Dwayne Bravo could miss this round games as he was seen limping in the game against Mumbai Indians on Wednesday. Narine’s selection is also subjected to his fitness but can be picked based on toss result of the 17th game. Stoinis will have a key role to play for the RCB while Sam Curran might be rotated for Gayle and Tye.

The leg-spinners Rashid, Chahal and Tahir will be the first preferred names in the bowlers’ category. Mohammed Shami will be a worthy selection given KXIP will be playing three matches. MI could be seen resting Jasprit Bumrah for at least one of the two matches in this round. The pacer had suffered blows to his shoulder and face in this tournament so far though they were not threatening ones.

Both Kuldeep and Bhuvneshwar gained form in their respective matches in Delhi against the Delhi Capitals. Shreyas Gopal will be an economical pick but has got only one match to play in this round. Mohit Sharma could retain his place given the struggles of Shardul Thakur and injury concern of Dwayne Bravo.

Andre Russell will be perfect for captain role as KKR have three matches in this round. Kings XI’s KL Rahul can be a useful selection for the multiplier roles. Going by the recent form of both David Warner and Jonny Bairstow will be ideal for a multiplier option along with Hardik Pandya. 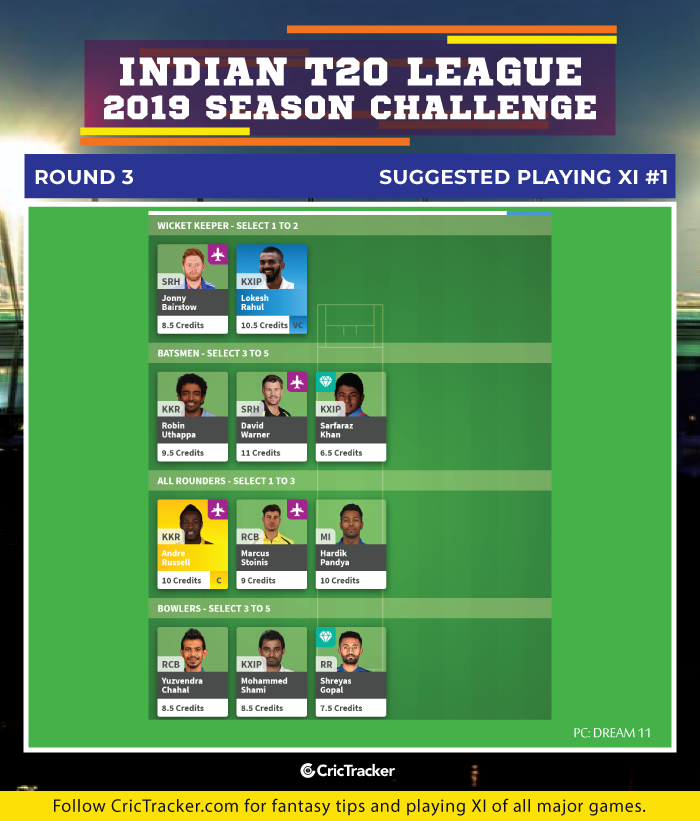 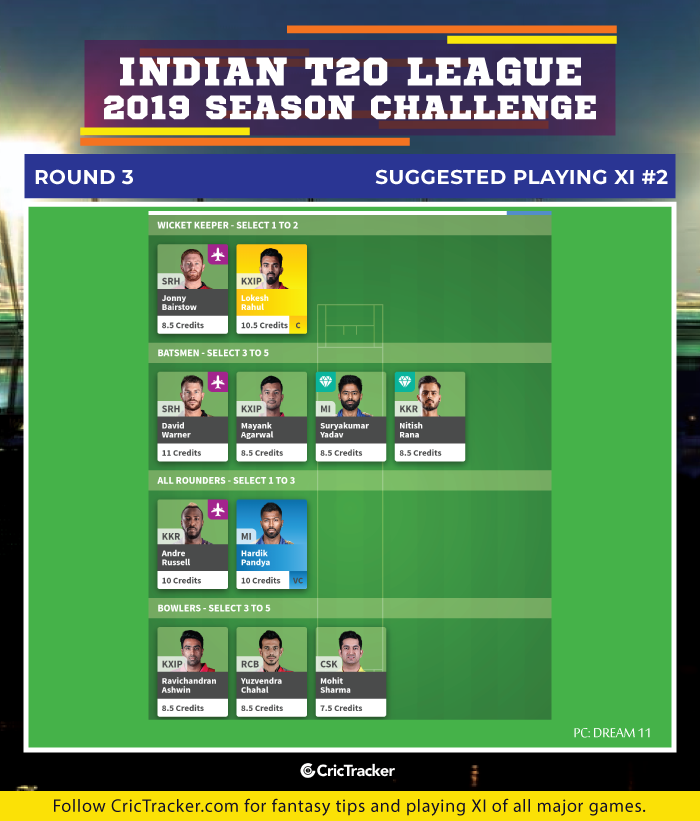