The 8th round of the season fantasy covers the two qualifier matches and eliminator game.

The 8th round of the Indian Premier League (IPL) official championship fantasy league covers up the first three matches of the playoff stage. The choice of players for this round among the four qualified teams will be crucial given two teams will be playing twice in this round. The teams that will be playing the 2nd Qualifier won’t be known prior to the deadline makes this round easily the toughest. Going by the strengths and records, CSK and SRH are most likely to play the second Qualifier.

MS Dhoni is easily CSK’s best batsman in this IPL and will have a big role to play for pushing CSK to finals. Quinton de Kock might struggle at Chepauk and even in Vizag if MI lose the Qualifier. The South African has struggled to get going against spin. Rishabh Pant can be handy with his glove-work as the young keeper-batsman has affected a record 23 dismissals thus far. Wriddhiman Saha is good at producing quick 20-30s at the top for Sunrisers.

The 2.0 version of Shikhar Dhawan has guided Delhi Capitals to playoffs and he will be key for DC’s chances of first ever IPL final. Manish Pandey has been impressive in the second half of this season while Kane Williamson bounced back with an unbeaten fifty in the last league game. The likes of Suresh Raina and Rohit Sharma have scored a couple of fifties in the last few games to improve what has been an average tournament with the bat. Suryakumar Yadav serves as an uncapped pick from this category.

Hardik Pandya was impressive in the last game with the bat despite not getting a chance with the bat. He has been consistent in all departments throughout the tournament and is easily the 2nd best MVP after Andre Russell. Playing on tracks like Chepauk and Vizag could help spin all-rounders like Ravindra Jadeja, Krunal Pandya and Mohammad Nabi

Imran Tahir has to be the first name in this set given his performances at home this season. Lasith Malinga has two 3-fers against CSK this edition and is expected to continue the same. Jasprit Bumrah might be played out by the CSK batsmen who will be targeting the remaining bowlers. The uncapped leg-spinner Rahul Chahar has performed throughout the season while Khaleel Ahmed has taken 3-fers in each of his last three matches. 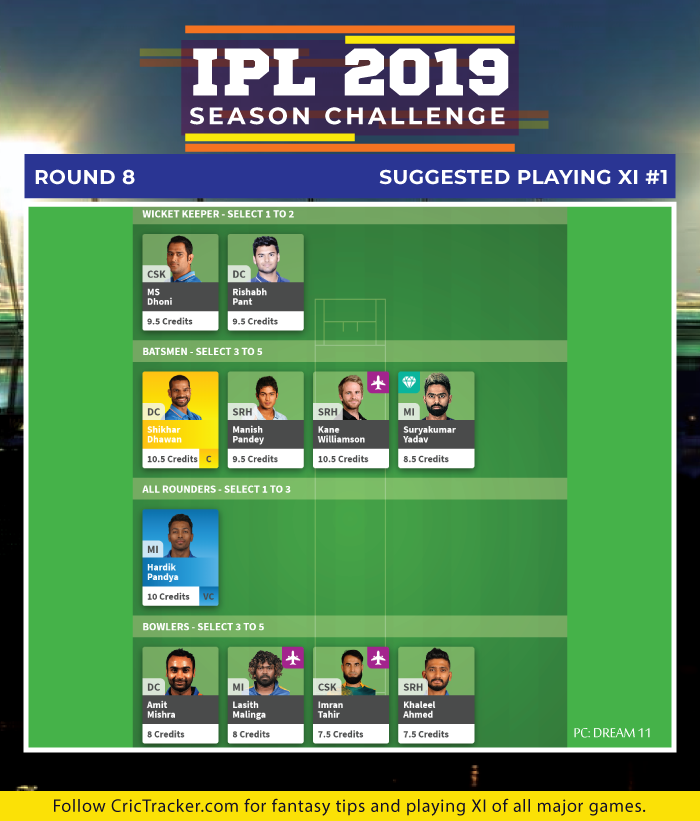 Hardik Pandya is a must as captain or vice-captain in the current form. Shikhar Dhawan and MS Dhoni’s consistency can be considered as well. The tracks in Chennai and Vizag are ideal for Ravindra Jadeja and makes him a worthy pick as vice-captain.

If anyone has left with the Free hit option, they can use if for the first Qualifier between MI and CSK. Depending on how the pitch plays during the Eliminator, the Free Hit option can be saved for the 2nd Qualifier as well. (The Free Hit booster multiplies the fantasy points in a game by two times. This is currently available only on official fantasy site.) 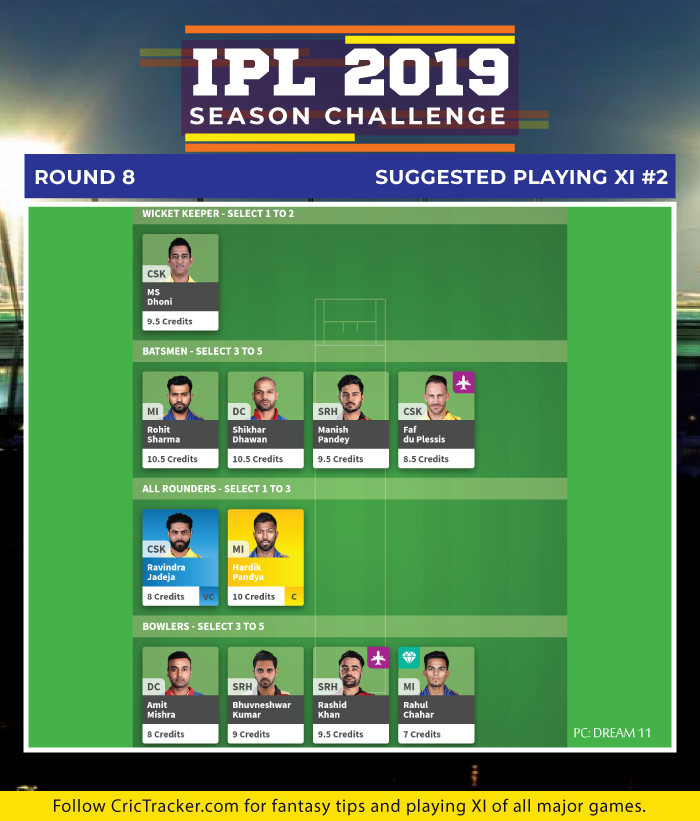