CSK lost both their round-robin matches against Mumbai by 37 and 46 runs respectively.

After all the excitement in the round-robin stage of the ongoing Indian Premier League (IPL), it all boils down to the playoffs. Mumbai Indians (MI) and Chennai Super Kings (CSK) are scheduled to lock horns tomorrow in the Qualifier 1 at the MA Chidambaram Stadium. In their previous meeting at the Chepauk, Rohit Sharma & Co. comprehensively emerged victorious by 46 runs, but MS Dhoni wasn’t a part of that CSK team and we know the difference he can make.

In fact, Mumbai got the better of the Super Kings even at the Wankhede Stadium, that was a 37-run win. Having won the championship three times each, the playoffs stage isn’t unfamiliar territory for both the popular franchises by any stretch of the imagination. Moreover, both the teams would be brimming with confidence as their last victories in the league stage were nothing short of thumping.

The track at Chepauk has been slow and run-making hasn’t been all that easy. The spinners have dictated terms and a similar kind of a pitch is expected in the crunch match. It won’t be much of a surprise if the teams pack their lineup with spinners.

The temperature during the game will be between the 33 degrees Celsius and the 35 degrees Celsius. The conditions will be humid with the numbers between 56 and 65 per cent. Dew will also play its part. There will be 90 plus percentage of cloud cover, but there isn’t any chance of a downpour.

Mumbai may bring in Evin Lewis in place of Ishan Kishan. Lewis scored 32 at the Chepauk last time and he can also explode if required. MI may rope in Anukul Roy and bench Mitchell McClenaghan, keeping in mind the nature of the strip. Roy will partner Rahul Chahar and Krunal Pandya in the spin-department. The role of Quinton de Kock and Rohit Sharma in the mandatory powerplay will be crucial as well.

The Super Kings are likely to bring in Dhruv Shorey as Kedar Jadhav’s replacement. Jadhav won’t take further part in the IPL owing to a shoulder injury. Shane Watson’s poor form is a matter of concern. In the spin department, the CSK trio, comprising Jadeja, Harbhajan and Tahir, has been the best and the focus will be on them. The influence of Dhoni for his captaincy remains to be CSK’s biggest strength.

The last time, Rohit played at the Chepauk, he scored a 48-ball 67 that drove the Mumbai-based franchise to a commanding position. In MI’s last game against the Kolkata Knight Riders (KKR), the right-handed batsman notched an unbeaten 55 to steer his team through. Sharma has the experience of playing in pressure games and he will have to bring all that experience to the fore tomorrow.

When it comes to holding nerves under extreme pressure, one will strain to find someone better than Dhoni, the 37-year-old youngster. Despite missing two games this season, he is CSK’s leading run-scorer with 368 runs at a gigantic average of 122.66. The Jharkhand-born keeper is a big match player and the team would be hoping for the veteran to bring forth his A-game. 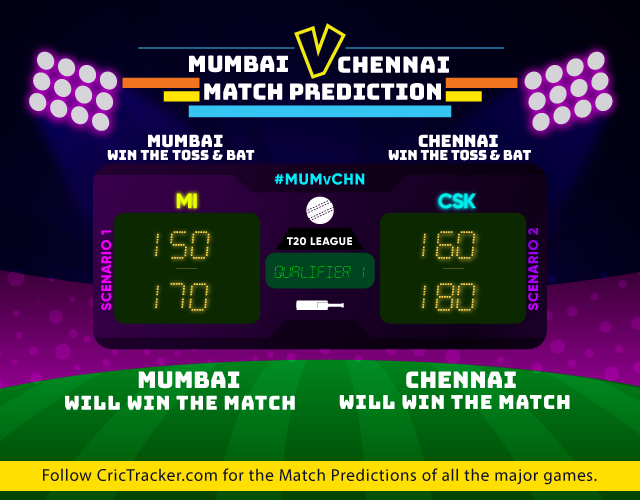