IPL 2019: Qualifier 1, MI vs CSK, Preview - The all-mighties of IPL battle for a place in the final

IPL 2019: Qualifier 1, MI vs CSK, Preview – The all-mighties of IPL battle for a place in the final

Chennai will be hosting this all-important clash and the hosts will definitely have an edge.

The two primetime giants of the Indian Premier League (IPL) yet again are in the business end of the tournament looking for a record-breaking fourth title. In Spain, they have the El Classico, in England, Manchester United and Liverpool battles personify the term “arch-rivalry”, in Germany there’s Dortmund and Munich and in India, it’s always been Mumbai Indians against the Chennai Super Kings.

Rohit Sharma and his men once again started off on a slow note but managed to finish on top of the table. The strength they possess at this point in time is a bit too scary for any opponent in the world. While Hardik Pandya is tonking it big with the bat, Jasprit Bumrah is running riot with the ball. They remain to be the core of this current MI setup.

The Chennai side will be without one of their main men in the middle order, Kedar Jadhav. Although he has not been at his best this season, his experience will be missed. MS Dhoni with the bat has been a force to reckon with and the likes of Faf du Plessis and Suresh Raina getting among the runs regularly is a huge positive for the side.

It will be interesting to see if Mumbai Indians go horses for courses on this turning track. If they do so, Ishan Kishan will receive the sacking to accompany Evin Lewis whilst Mitch McClenaghan will be out to let Anukul Roy come in. The Pandya brothers put up a brilliant bowling show against KKR and the Mumbai fans will want to see another such effort in this all-important game. The Indian stars Suryakumar Yadav and Rahul Chahar will face a stern test as well.

Kedar Jadhav’s injury means Dhruv Shorey will take his place in the XI. Faf du Plessis registered a brilliant 96 to sign off with the group stages and CSK will rely on the Proteas captain to produce a couple more knocks in the business end. Harbhajan Singh has been an unsung hero thus far and given his success at Chepauk, might as well prove to be the trump card for Dhoni against his former side. Suresh Raina is getting among the runs whilst Tahir will be chasing hard for the purple cap. 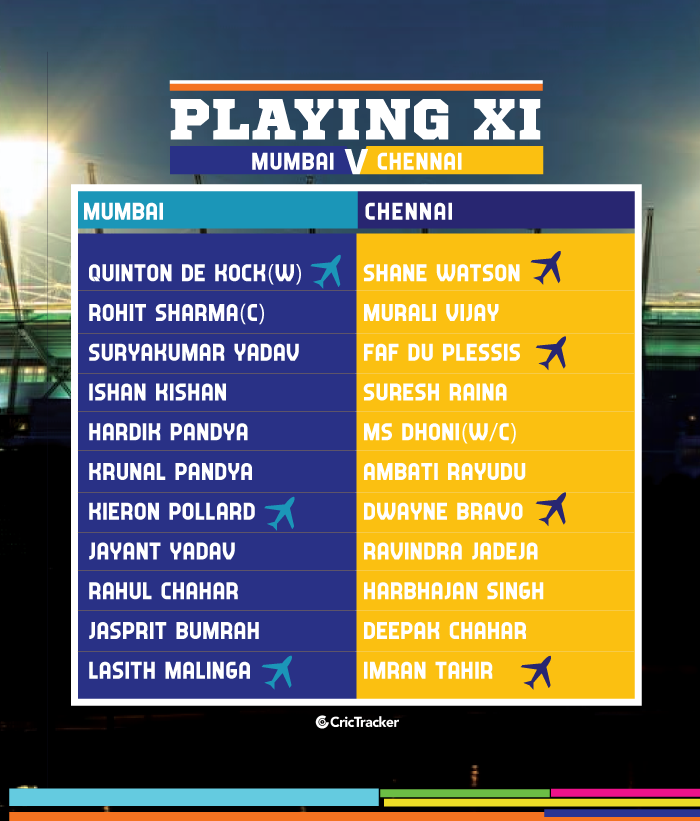 Just when the fans were getting upset with Rohit Sharma’s form, the Indian vice-captain chipped in with some good scores in the last three innings. He is striking the ball confidently once again, which is a threatening sight for any bowler in the world. The 32-year-old has a fantastic opportunity to overtake the legendary MS Dhoni, who is on level terms with him at 3 IPL titles as a captain and he surely would want to cash in on this golden chance.

Without doubts one of the finest batsmen in world cricket right now, when the chips are down, Faf finds his top gear. Last season in the first Qualifier against Sunrisers Hyderabad, he gifted CSK a win from the jaws of defeat, playing one of the most memorable knocks in IPL history. Considering at how the pitch has been playing in Chennai, it might be difficult for him to replicate something similar but he definitely is capable of producing another match-winning show.

368 – MS Dhoni was the highest run-scorer for Chennai this season in the group stages with 368 runs, a feat he never achieved in his 10-year association with the franchise.