Here we look at the players whom Sunrisers Hyderabad could go for at the auction.

Sunrisers Hyderabad excelled in the previous edition of the IPL given the depth in their bowling to finish as the table toppers in the group stage before settling down as the runners-up. The SRH team lost the services of their vital cog in the batting, David Warner, ahead of the tournament. However, Kane Williamson, with his never new found T20 distinction, led the team close to the title. They went almost all the way despite inconsistent efforts from their batting side.

Kane Williamson and Shikhar Dhawan starred in most of the matches for SRH but they will be without the Indian star opener from here on. The return on Warner will be a much-needed boost for the Sunrisers who are in need of similar returns from middle and lower-order. They are also looking for wicketkeepers who can add value with gloves as well. The SRH team already has a good amount of options for the bowling department.

Here we look at the players whom Sunrisers Hyderabad could go for at the auction:

With INR 9.7 crore left in the purse for five players, SRH needs to be little intelligent with their squad selection as they also have two overseas spots. Daniel Christian could solve SRH’s finishing troubles as he is good at smashing the pacers long. Christian can chip in with a couple of overs which he might not need to do quite often due to the bowling quality of SRH. Jonny Bairstow, in current form, can be bought in as a pure batsman.

However, Bairstow might not be available for the full season and SRH should have a proper backup in that case. The Hyderabad franchise might go back to Wriddhiman Saha who is recovering from an injury that put him out of the game since the IPL. The local left-arm spinner Mehdi Hasan has had good success in the Vijay Hazare Trophy where he even got better of Rohit Sharma.

Another pick could be the TNPL sensation R Vivek. The hard-hitting batsman is yet to make his senior debut but can be a handy back-up for middle-order which was their weak link last year. Vivek scored 262 runs in seven innings in the 2018 edition at an average of 52.4 and a strike-rate of 209.6. He struck 22 sixes in the tournament hitting one maximum at an average of 5.7 deliveries.

Here are the players Sunrisers Hyderabad would want to go for in IPL 2019 auction: 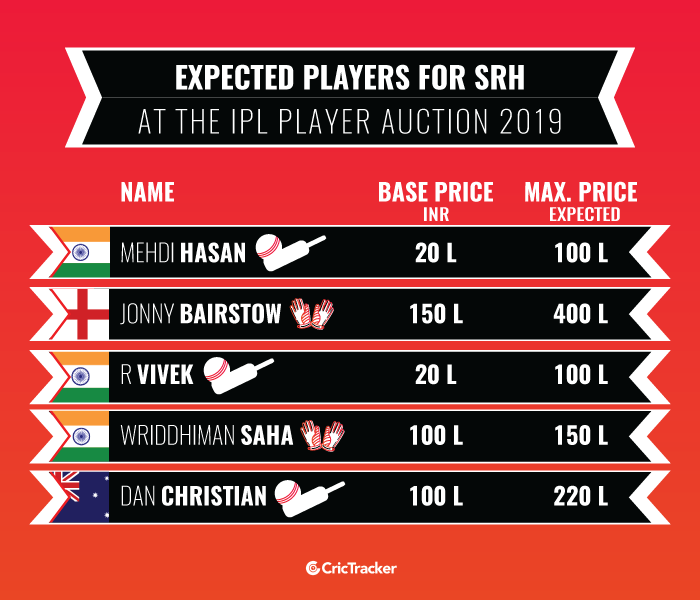