Chennai Super Kings have suffered major blows ahead of the commencement of much-awaited IPL 2020. The Chennai franchise, days before the tournament, were jolted after 13 members of the CSK squad had tested positive for the coronavirus. To make things worse, their vice-captain Suresh Raina and veteran Harbhajan Singh also decided to opt out of the league owing to personal reasons.

It’s been downhill ever since for the Yellow Army but considering their consistency and reputation, the MS Dhoni-led side is expected to put up a dominant show in this year’s IPL edition. CSK’s training was delayed due to the confirmed COVID-19 results but the Yellow Army will certainly aim to get back on track and march towards their fourth IPL title this year.

Meanwhile, after many delays, the IPL 2020 schedule was finally rolled out by the BCCI on Sunday. The much-awaited IPL 2020 is all set to finally start on September 19th, with the final being locked on November 10th. The final will be played on the weekday for the first time in IPL history.

As far as the schedule is concerned, the 56 league matches will go on until November 3 after which the top four teams will qualify for the playoffs. Talking about Chennai’s fixtures, the Yellow Army will start their IPL campaign by locking horns with Mumbai Indians in the season opener of September 19th. As per the norms, defending champions MI will face CSK at Sheikh Zayed Stadium, Abu Dhabi.

All the matches are set to take place in Dubai, Sharjah and Abu Dhabi in three different legs. After their first encounter, CSK will face Rajasthan Royals on 22nd September, followed by Delhi Capitals on 25th September.

CSK’s campaign in October will start with them facing Sunrisers Hyderabad at Dubai International Cricket Stadium on 2nd October. Marching further, Dhoni and his troops will face Kings XI Punjab on 4th October and Kolkata Knight Riders on 7th October.

On 10th October, the world will witness the clash between Virat Kohli and MS Dhoni as CSK will take on Royal Challengers Bangalore at Dubai International Cricket stadium. On 13th, 17th and 19th October, CSK will battle with Sunrisers Hyderabad, Delhi Capitals and Rajasthan Royals respectively. 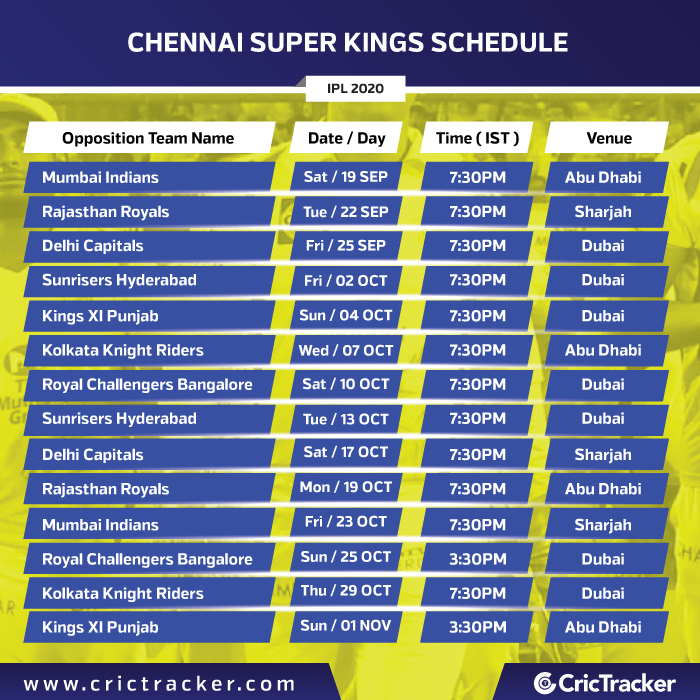