It is something rare for the yellow jerseys and it will be a first in the tournament’s history if they do not find themselves in the Playoffs next month. 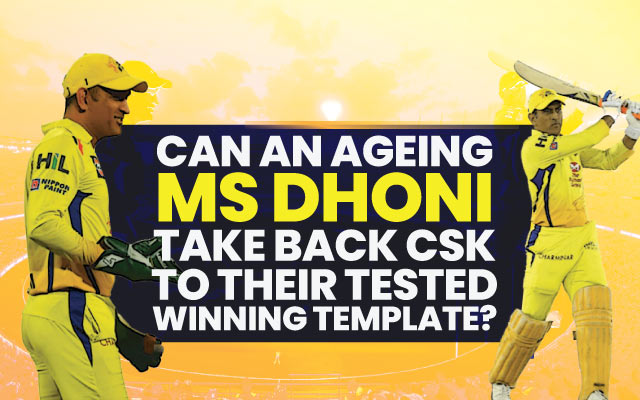 The year 2020 is an exceptional year. Like a lot of things outside the cricket field, exceptions are being seen inside it as well. And one of them is the performance of the Chennai Super Kings (CSK) in the 13th edition of the tournament, being held currently in the UAE.

Led by former India skipper Mahendra Singh Dhoni, the Chennai side started off well but could win only one match in their next five outings and are finding themselves outside the top four teams in the points table.

It is something rare for the yellow jerseys and it will be a first in the tournament’s history if they do not find themselves in the Playoffs next month. The CSK have always ended among the top four in all 10 editions they have played so far and lifted the crown thrice, the second-most time after Mumbai Indians (four).

Why are the Chennai lions finding the mission challenging this time? It is not adequate an explanation to say that the absence of Suresh Raina is making them pay. CSK have always been a powerhouse of teamwork and always rallied around some key individuals led by their famous captain. But they have somehow not been able to get their acts together for the entire 40 overs in this year’s edition and that is hurting their progress.

One big reason why CSK are failing is that they are not chasing well enough this year. Chennai have batted second in all the six games they have played this year so far and it was only on two occasions that they drove home successfully. In those two wins against Mumbai Indians (5 wickets) and Kings XI Punjab (10 wickets), the CSK’s top order fired while in the other four matches they lost, they left the job to be accomplished far too late.

One reason why the CSK saw themselves among one of the most successful sides in the IPL is their depth in the batting and that depth was because of the presence of a grand finisher in Dhoni.

Even as the wicketkeeper-batsman failed to strike big in international cricket, he did well with the bat in the last two seasons with six fifties and led his team to the final and winning the crown once. But this year, when he is also playing the IPL as a former international player for the first time, his show with the bat has been far from satisfactory.

Even though he averages 51 at the moment, none of his knocks helped his team to win a game, which is again rare by Dhoni’s standards. His 29 not out against Rajasthan Royals came far too down the order (at No.7) and the CSK lost by 16 runs; 15 against Delhi Capitals at No.6 was not inspiring as CSK crashed to a 44-run defeat while 47 not out against Sunrisers Hyderabad came at No.5 but Chennai went down fighting by seven runs. His overall strike rate of 129 is not too low but it has not produced the result that his followers would have loved to see.

On Thursday, October 7, against the Kolkata Knight Riders in Abu Dhabi, Dhoni promoted himself even one place up to No.4 but a missed slog-sweep against a young Varun Chakravarthy just after he hit a boundary in front of point saw his timber getting rattled and it was a massive opportunity missed for one of the game’s biggest finishers. 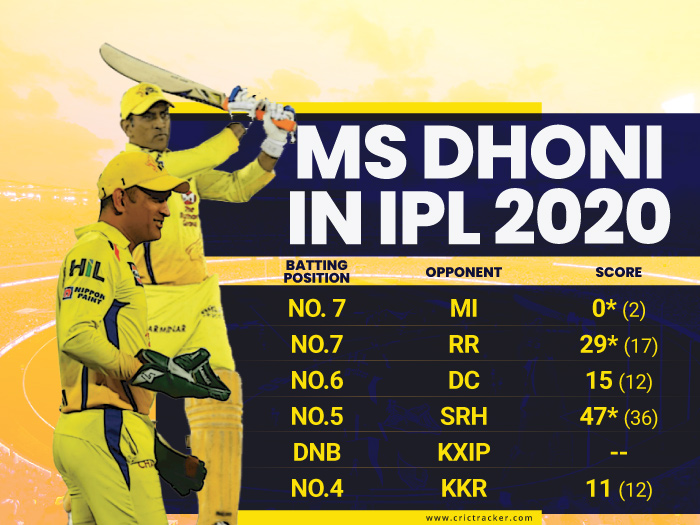 The machismo has vanished; Dhoni now looking for a batting position

This situation leads us to the question: Is CSK’s Dhoni factor now a thing of the past? The machismo of the Ranchi batsman down the order had always made any target look achievable for the Chennai side in the past and even when it didn’t, the hope was not entirely lost.

But that equation is fast changing now and Dhoni’s floating batting position is giving abundant indication that the man himself is in the lookout for a stable corner in the batting line-up.

He is gradually coming up the order so that he gets more time to get used to the slower wickets of the UAE while chasing. That is a sign of a batsman who is not in a confident mind. Moreover, as Dhoni floats along with the batting order without much success, it also affects others’ batting positions and hits the overall stability of the order.

CSK’s conservative starts have not helped the cause of the lower order, including Dhoni, either and the entire team is now facing a massive challenge of adaptability in its batting strategy. An ageing Dhoni himself is scrambling for answers and CSK muddling to get a perfect batting order in place. Set to complete 50 per cent of their matches, CSK’s current situation is not a story about how the best teams win matches and tournaments. It is not an easy situation for the Super Kings as nobody can really turn into another Dhoni and take back the team to its tested winning template.

Dhoni struggling on the ground

Dhoni is also struggling physically. In the match against the Royals in Sharjah, Dhoni’s fatigue on the ground while batting was eye-catching. The man is known for his top fitness standards and to see him struggling to complete runs was shocking for many, including former India Test opener Aakash Chopra. Playing competitive cricket after more than a year, Dhoni looks heavy and after keeping the wickets for full 20 overs, batting perhaps is not the same child’s play for him in the humid conditions.

There is not much one can say here to shield the batsman’s fitness concerns because had the IPL this year been played in India and in the summer times instead of now, the challenges of humidity would have been even more.

So far, Dhoni’s leadership with his athleticism has failed to impress. Till the coronavirus pandemic hit the cricketing world, many had hoped that the man would explode in IPL to prove his critics wrong and make it to India’s squad for the T20 World Cup squad for Australia around this time of the year.

But after all plans went astray with the T20 World Cup getting scrapped and Dhoni calling it a day from international cricket, one feels the IPL this year might make the champion cricketer comparatively less enthusiastic. It is not surprising if he is indeed thinking that way even though for his million supporters, it would be a major heartbreak if CSK fail to make the Playoffs this year.