DC would next be facing Mumbai Indians in the Qualifier 1.

Delhi Capitals (DC) managed to make their way to the playoffs in the 2020 edition of the Indian Premier League (IPL). The team, led by Shreyas Iyer, beat the Royal Challengers Bangalore (RCB) by six wickets at the Sheikh Zayed Stadium in Abu Dhabi, on Monday, November 2, to qualify for the second round. DC finished second on the points table after the Kieron Pollard-captained Mumbai Indians (MI).

In the Qualifier 1 on Thursday, November 5, DC would be facing MI in a quest to make the finals. As far as Monday’s match was concerned, after winning the toss and electing to field first, the Capitals restricted the Challengers to 152 for the loss of seven wickets in their 20 overs. In the run-chase, Shikhar Dhawan and Ajinkya Rahane’s half-centuries guided them over the line without much fuss.

With DC’s triumph, Royal Challengers Bangalore (RCB) also went to the second round after they finished third in the points table. Virat Kohli’s men would be facing either Kolkata Knight Riders (KKR) or Sunrisers Hyderabad (SRH) in the Eliminator. Even as three spots in the playoffs are fixed, the fourth will be decided after MI’s match against SRH on Tuesday at the Sharjah Cricket Stadium.

In the meantime, after the win in their last league game versus the Challengers, the Capitals achieved a unique record. They finished second on the points table and it’s the first time they finished at the particular spot. It also meant that the Delhi-based franchise have finished on all ten positions from 2008 to 2020. At first, sixth and eighth, DC ended two times.

It remains to be seen if they can make the final in the first attempt. In the league stage, MI defeated them on both instances and the Capitals will have to put their best foot forward to turn the tables. The game will be played at the Dubai International Cricket Stadium.

In 2019, they made the Qualifier 2 where they lost the Chennai Super Kings (CSK) in Vizag. DC are yet to win the championship and would be hoping to get their hands on the coveted trophy going forward. 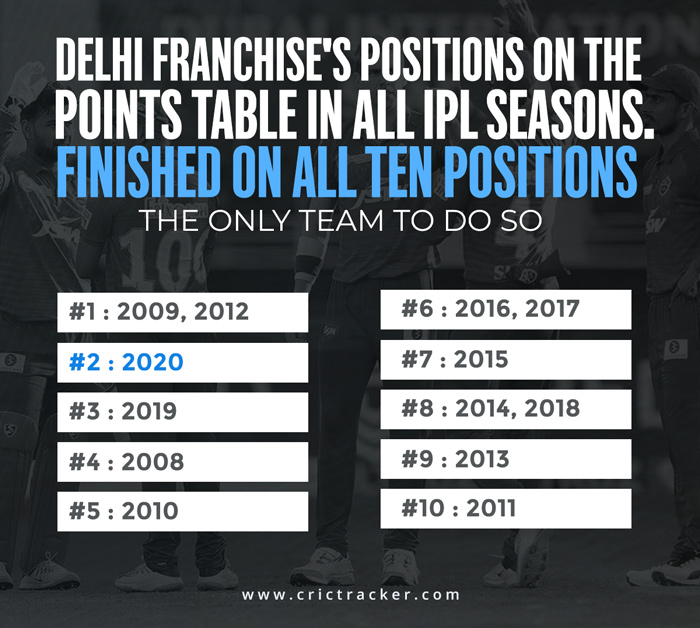