CSK will play its first home game on April 2 against the Rajasthan Royals.

Chennai Super Kings (CSK) have been one of the most successful teams in the history of the Indian Premier League (IPL). They have made it to the playoffs (top four) in every season that they’ve played. In fact, in only two seasons (2009 and 2014), they have not made it to the final. Despite not boasting of the best squad every season, CSK simply find a way to go through and come out on top every year.

After their reintegration in 2018 after a two-year hiatus, they’ve found a solid core. The MS Dhoni-led side made it to both the finals (in 2018 and 2019). They won the 2018 edition and came really close to defending their title as well as they lost the final in a last-ball thriller against Mumbai Indians (MI) who won their record fourth title.

In the IPL auctions for the 2020 season, CSK bought just four players and retained most of their core. They splurged big money on Piyush Chawla who was bought for INR 6.75 crore and Sam Curran who was paid INR 5.5 crore. They also added Josh Hazlewood and R Sai Kishore to their squad and that rounds up a 24-man line-up.

Just like the 2018 season, CSK start their IPL campaign with an away game in Mumbai as they face the defending champions Mumbai Indians (MI) at the Wankhede Stadium on the 29th of March. They return to what is expected to be a grand sea of yellow at the MA Chidambaram Stadium (Chepauk) in Chennai on the 2nd of April to face Rajasthan Royals (RR).

It’s largely alternating home and away fixtures for the three-time champions. They have three back to back home fixtures towards the end of April as they face SRH, MI and RCB on the 19th, 24th and 27th of April respectively before flying to Hyderabad for the return fixture against SRH. Their last stretch at home also consists of two consecutive games on the 7th and 10th of May as they play against KKR and DC.

Their last league encounter will be against RCB in a mouth-watering South Indian Kaveri-derby. MS Dhoni and his troops will be on the hunt for his fourth IPL title as CSK aim to draw level with MI. 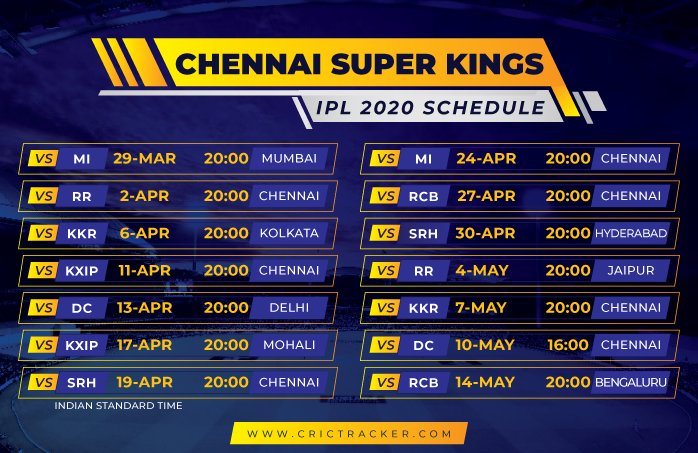