In the IPL auction this time, RCB underwent a mini-overhaul and they retained just 13 and added eight more to the squad for the 2020 edition.

Royal Challengers Bangalore (RCB) have been among the most popular teams in the history of the Indian Premier League (IPL). However, it wouldn’t be wrong to say they have been the perennial underachievers in this Indian T20 league. RCB have made it to just three finals and haven’t won it even once. Moreover, out of 12 seasons, they could reach the playoffs only on five instances.

In fact, they’ve failed to make it to the top four for three seasons in a row now. They finished with the wooden spoon twice in 2017 and 2019 and finished sixth in 2018. Hence, despite having the firepower, RCB just haven’t been able to make it count.

In the IPL auction this time, RCB underwent a mini-overhaul and they retained just 13 and added eight more to the squad for the 2020 edition. They have added the likes of Aaron Finch, Chris Morris, Dale Steyn, Isuru Udana, Josh Phillipe and Kane Richardson as their international recruits. Once again, they seem to have all bases covered and it’ll be interesting to see how things pan out.

In fact, they have completely overhauled their look as a franchise. They have a new logo and have restarted the Instagram page as they deleted their older posts and seem to have started afresh.

RCB kick things off with a home game against KKR

As far as cricket on the field is concerned, RCB kick things off with a home game as Kolkata Knight Riders (KKR) travel to Bengaluru on the 31st of March. There are a couple of alternating home and away fixtures for a couple of weeks before RCB have some home comfort for a while as they face Rajasthan Royals (RR) and Delhi Capitals (DC) in back to back games at the Chinnaswamy Stadium in Bengaluru.

However, soon after this, they head for a string of away games before the alternating home-away fixtures start again. But the three-time IPL finalists end their campaign with a couple of successive home games. They face Chennai Super Kings (CSK) on the 14th of May before Mumbai Indians (MI) travel to Bengaluru on the 17th of May and the game against MI will be the final league encounter of the season (56th match). 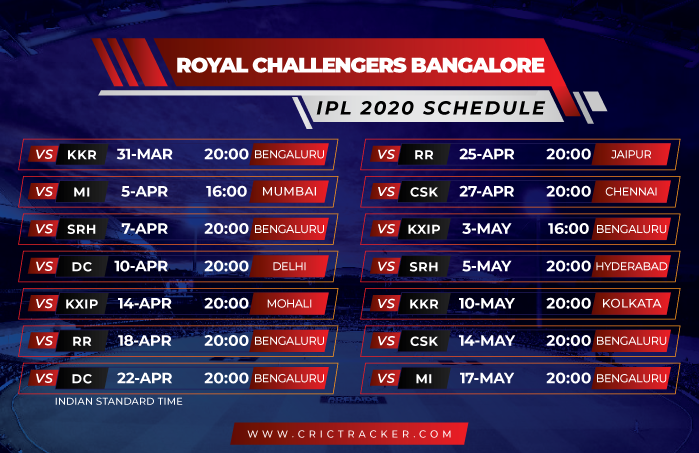