The Super Kings will be desperate to cease their five-match losing streak against Rohit Sharma and Co.

Chennai Super Kings (CSK) had bit of a nightmare against Mumbai Indians (MI), losing four out of four in the 2019 Indian Premier League (IPL). MS Dhoni’s men even lost the final by one run despite Shane Watson, scoring a fifty with a bloodied knee.

But going into the 2020 edition, CSK can take heart from the fact that in 2018 and in the last year, they managed to win their opening matches. CSK were dented with blows after Suresh Raina and Harbhajan Singh opted out.

However, Dhoni’s leadership skills make the Super Kings a formidable unit. MI, on the other hand, lost Lasith Malinga, but have the likes of Jasprit Bumrah, Trent Boult among others, who can turn games on their heads. The Super Kings, meanwhile, will be desperate to cease their five-match losing streak against MI.

The pitch in Abu Dhabi has traditionally been tough for the batters. Run-making may not be all that easy, especially against the spinners. The long boundaries won’t make life any easier for the batters either.

It might be ideal for teams to send the opposition in and gauge the nature of the surface. There are no chances of rain and the temperature will be around the 34-degrees Celsius mark.

Kieron Pollard was in red-hot form for the Trinbago Knight Riders in the 2020 Caribbean Premier League (CPL). Even on difficult surfaces to bat, he scored at a strike-rate of 204.94 with as many as 20 sixes from 11 matches. The average of 51.75 meant that he was consistent enough. On an expected slow strip in Abu Dhabi, Pollard’s medium pace can also come in pretty handy for MI.

Faf du Plessis takes calculative risks and puts a price tag on his wicket. He may not be the most fluent player going around, but his effectiveness can’t be questioned. In trying conditions, Faf doesn’t mind putting his head down and absorbing the pressure. Though the South African has been in and out of the Super Kings’ lineup, this year, in Raina’s absence, he can play the sheet-anchor’s role.

The prediction is for Chennai Super Kings to win the match. 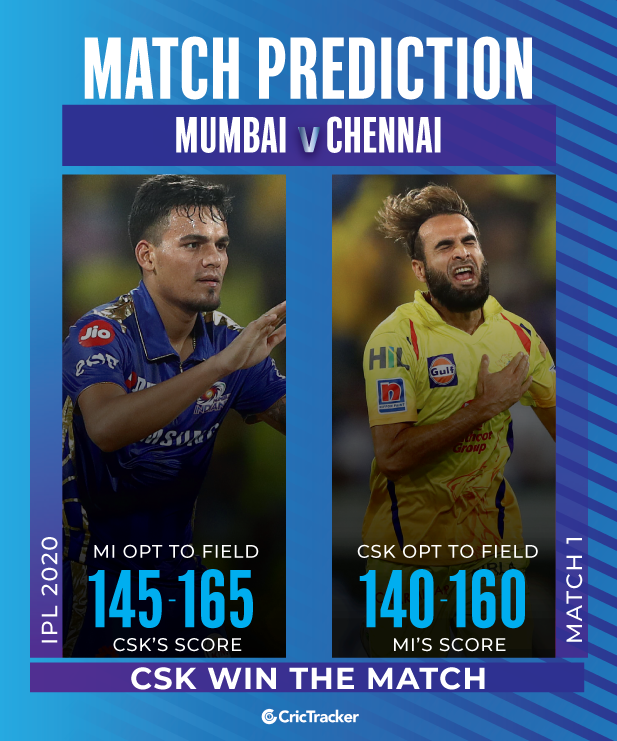