A collective team effort by RCB put themselves to No.3 on the points table.

The boundaries at the Sharjah Stadium hardly matter during RCB vs KKR while the pitch stayed on the slower side. On such a track, AB de Villiers stood out as the difference between the two teams who smashed an unbeaten 73 in only 33 deliveries with five fours and six maximums. While De Villiers scored his runs at a strike rate of 221, the rest of the players in the match managed to record their runs at only 105. It won’t be a surprise to say that the South African produced the most impactful performance of the game.

AB de Villiers, batting at No.4 earned an impact of 33.94 as per the CricTracker’s Match Impact Ratings which is more than three times to any other player’s impact during RCB vs KKR. Each of RCB’s top three batters scored 30+ runs but their impact in the game was minimal. Devdutt Padikkal was the aggressive one of the three which earned him an impact of 3.44 while his opening partner Aaron Finch got 1.10. Virat Kohli struggled to get going through his inning which is why he got a negative impact of -1.69. 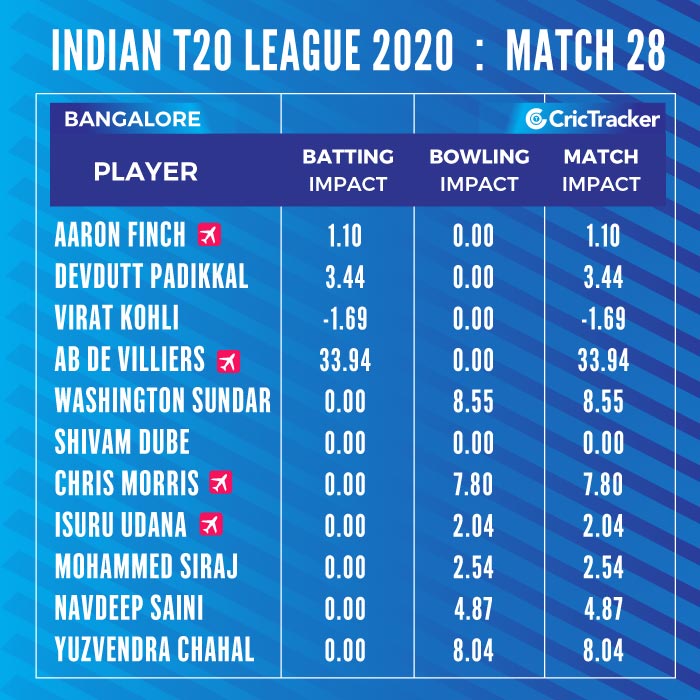 It was a collective bowling effort from the Royal Challengers Bangalore that helped them to win quite comfortably as all the six bowlers used by them claimed at least one wicket. The spinners Washington Sundar and Yuzvendra Chahal earned an impact over 8. Sundar conceded only 20 runs and bagged two wickets in his four overs while Chahal gave away just 12 runs alongside picking the wicket of Dinesh Karthik. The all-rounder Chris Morris also played a key role with the ball as he returned with the figures of 2/17 earning him an impact rating of +7.80.

Talking about the Kolkata Knight Riders’ players, only three of them finished with a positive rating during RCB vs KKR. Shubman Gill, who scored 34 from only 25 balls earned the best impact among KKR players of 6.10. Varun Chakravarthy conceded only 25 runs in his four overs while every other KKR bowler conceded over 36 runs. This helped the spinner to earn an impact of 4.78 which also the only bowling performance of KKR that got a positive impact rating during RCB vs KKR.