Mumbai Indians moved on to the top of the points table extending their head-to-head lead over Kolkata Knight Riders to 21-6 as they chased down the target of 149 by losing only two wickets. Quinton de Kock produced the most impactful performance of MI vs KKR as he raced to a 25-ball fifty and remained unbeaten on 78 off 44 balls smashing nine fours and three maximums. The South African’s batting performance fetched him an impact of 18.17 as per the CricTracker’s Match Impact Ratings.

The total of 148 was never possible without Pat Cummins’ maiden T20 fifty as the pacer struck an unbeaten 53 at No.7 position and earned an impact of 15.89. Varun Chakravarthy and Shivam Mavi were the only Kolkata Knight Riders’ bowlers who managed to trouble the MI batters in the chase. If not the duo, MI could have early got to the target before 15th over itself. Varun was the most economical bowler for KKR conceding only 23 runs and claimed the wicket of Suryakumar Yadav which earned him a rating of 6.77. 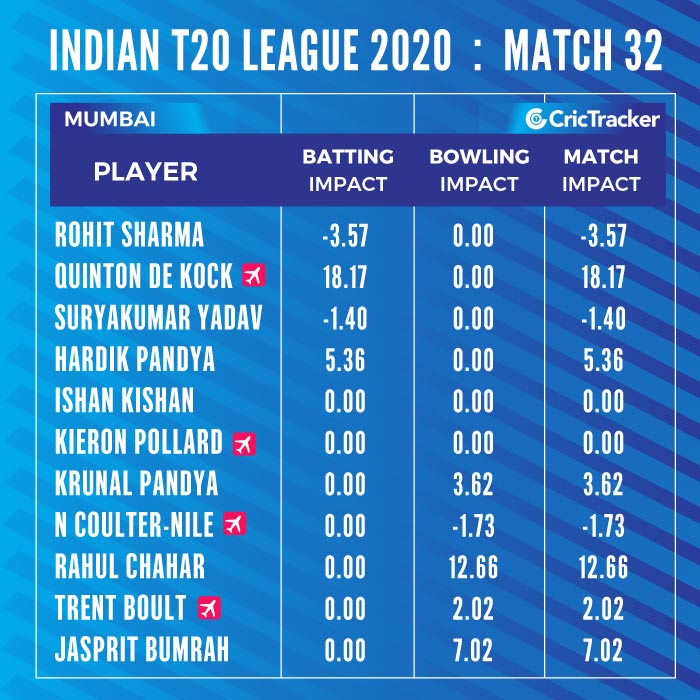 Rohit Sharma, despite scoring 35 runs in a winning chase, earned a negative rating of -3.57 as he took 36 deliveries to score that. Rohit was batting on 18 off 12 balls at one stage but slowed down towards the end of the powerplay and didn’t take many risks with De Kock hitting big at the other end. Hardik Pandya played a key role in finishing the game early as he smashed 21 in only 11 deliveries for which he earned an impact of +5.36. Only two players in this match earned a higher batting impact than Hardik.

The overseas pacers of Mumbai Indians were a touch expensive after their initial breakthroughs but the Indian bowlers contained the KKR batters conceding only 63 runs between them in 12 overs. Rahul Chahar produced the most impactful bowling performance in MI vs KKR as he finished with analyses of 4-0-18-2 which included the wickets of Shubman Gill and Dinesh Karthik in successive deliveries. He earned an impact rating of 12.66 while Jasprit Bumrah earned 7.02 for dismissing Andre Russell cheaply. 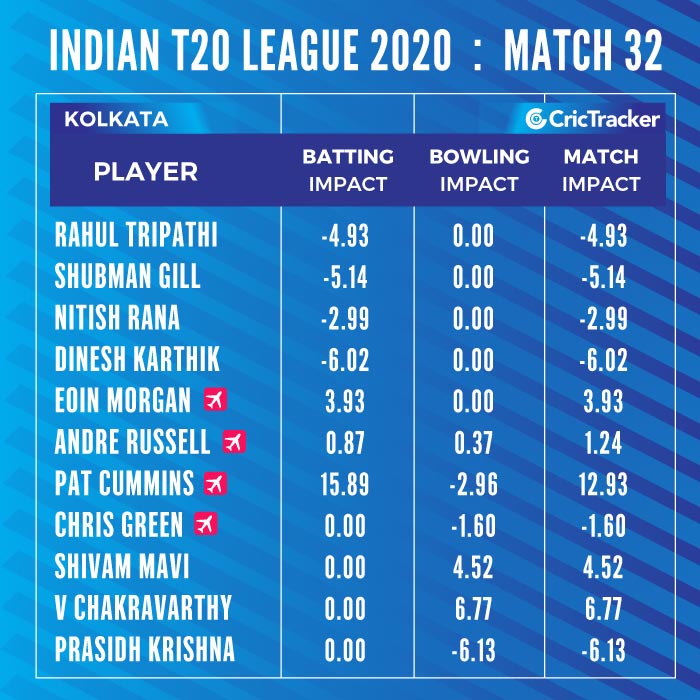