Jos Buttler was the star of the CSK vs RR match held in Abu Dhabi.

Chennai Super Kings are only one defeat after from missing out on the final four finish for the first time in the IPL history. CSK registered their 7th defeat of the league phase as Rajasthan Royals thumped them by seven wickets during a 126-run chase. Jos Buttler was the only batsman who played with the ease during CSK vs RR as he smashed an unbeaten 70 from only 48 deliveries with nine boundaries. His score of 70 is twice the next highest score in the game of 35* recorded by Ravindra Jadeja during the first inning.

This knock helped Buttler to produce an impact of whooping 26.61 as per the CricTracker’s Match Impact Ratings. The Rajasthan bowlers also played a crucial role during CSK vs RR with some tight bowling. Jofra Archer (+5.81) picked the wicket of CSK’s top-scorer Faf du Plessis and gave only 20 runs. The leg-spinners Shreyas Gopal (+7.41) and Rahul Tewatia (+6.61) were the real deal with the ball as they collectively gave away only 32 runs in the eight overs and returned with two wickets. 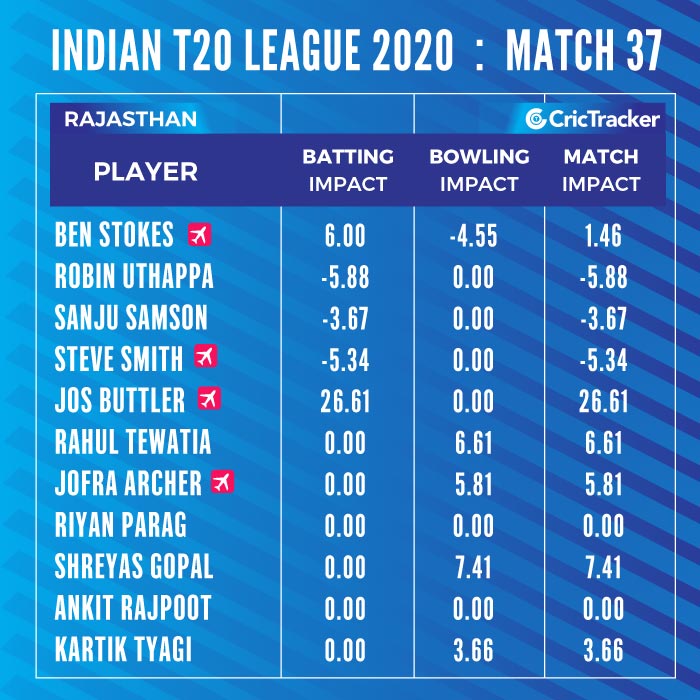 Ben Stokes played a short inning but in terms of impact, it was only next to Buttler during the CSK vs RR. The all-rounder scored 19 runs in only 11 balls with help of three fours to earn an impact of 6 which covered up his negative bowling impact of -4.55. Starting from Stokes’ dismissal, the Royals lost three wickets for two runs in the space of ten balls. A lot of credit goes to Deepak Chahar who returned figures of 4-1-18-2 with the new ball even after going for nine runs in opening over of the chase.

The swing bowler thus earned an impact rating of 9.87 which was the highest among the bowlers in CSK vs RR. His partner Josh Hazlewood (+6.66) also did a decent job by dismissing dangerous Robin Uthappa and by conceding only 19 runs in four overs. Chennai Super Kings’ misery with the bat can be explained through the strike rates of the batsmen as no apart from Shane Watson even had an SR of 120. The all-rounder got boundaries on the first two deliveries before hitting one straight into fielder’s hands on the 3rd ball. 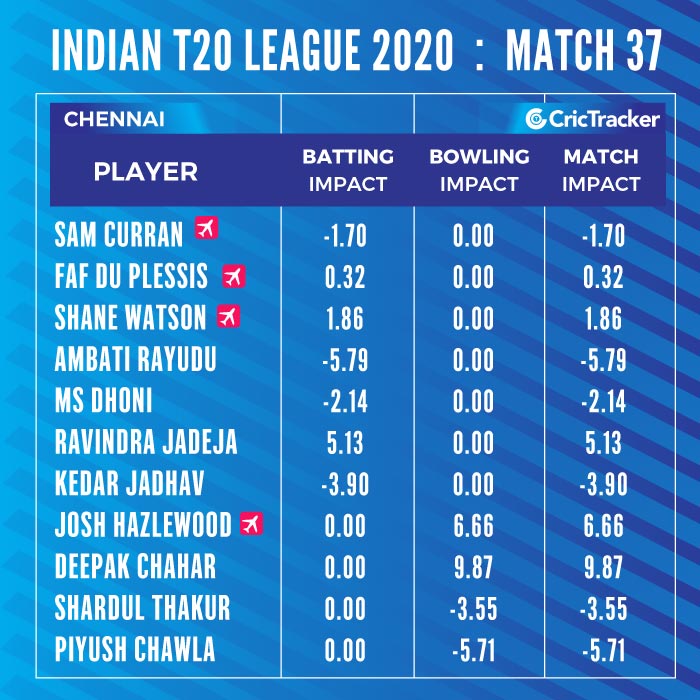