Only the second time Mumbai Indians suffered an outright defeat in the IPL 2020 as they went down in defending their total of 195/5 against Rajasthan Royals. The counter-attacking partnership between Ben Stokes and Sanju Samson was the reason behind the Royals registering the highest successful run-chase against the Mumbai Indians. Stokes, who had not scored even one fifty for the Royals in the IPL until the RR vs MI match, smashed an unbeaten 107 from 60 balls with 14 fours and three maximums.

The England all-rounder thus became the first player in IPL history to smash multiple centuries while chasing. Stokes scored an unbeaten century for the Rising Pune Supergiant in 2017 where he became the most valuable player of the season. The unbeaten ton on Sunday helped Stokes produce an impact of +13.74 which was the highest for any RR player during RR vs MI. Sanju Samson finished with a 54* off 31 balls which got an impact rating of +7.55 as per CricTracker’s Match Impact Ratings. This was Samson’s first fifty in ten games since his twin fifties in Sharjah. 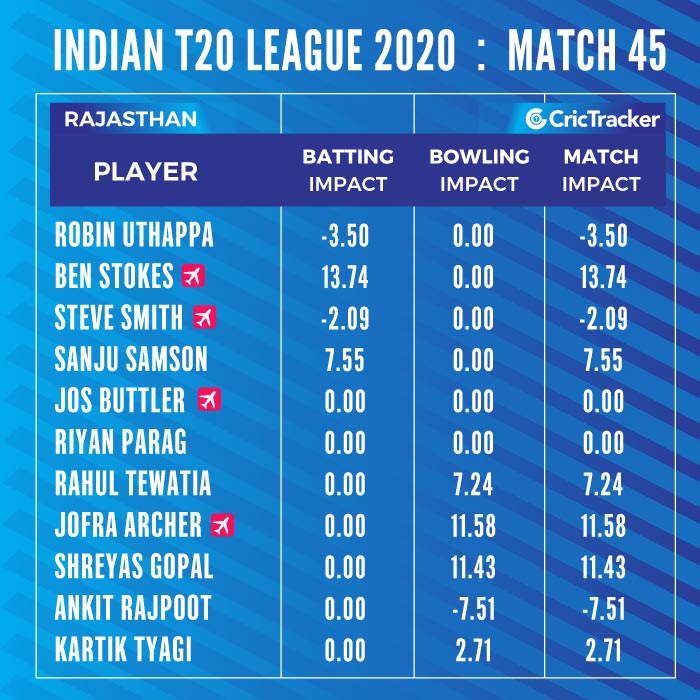 The likes of Shreyas Gopal and Jofra Archer played a key role for the Rajasthan Royals in keeping down MI to 195/5 on a belter of a pitch. Gopal dismissed both Suryakumar Yadav and Kieron Pollard in the same over which fetched him an impact of +11.58. Jofra was crucial in getting out inform Quinton de Kock in the very first over and also Saurabh Tiwary in the backend which got him an impact rating of +11.58. Rahul Tewatia was the most economical bowler (4-0-25-0) of RR vs MI earning him the impact of +7.24.

Hardik Pandya was easily the standout performer for the Mumbai Indians smashing an unbeaten 21-ball 60 with help of as many as seven sixes. The knock got Pandya an impact rating of +27.29 which is twice that of the Stokes, who was the player of the match. Ishan Kishan, the hero with the bat for MI in the previous game, ended up with a negative impact of -10.37 as he scored only 37 runs from 36 balls. MI team used six bowlers during RR vs MI but only James Pattinson (+7.93) got a positive impact for picking two wickets. 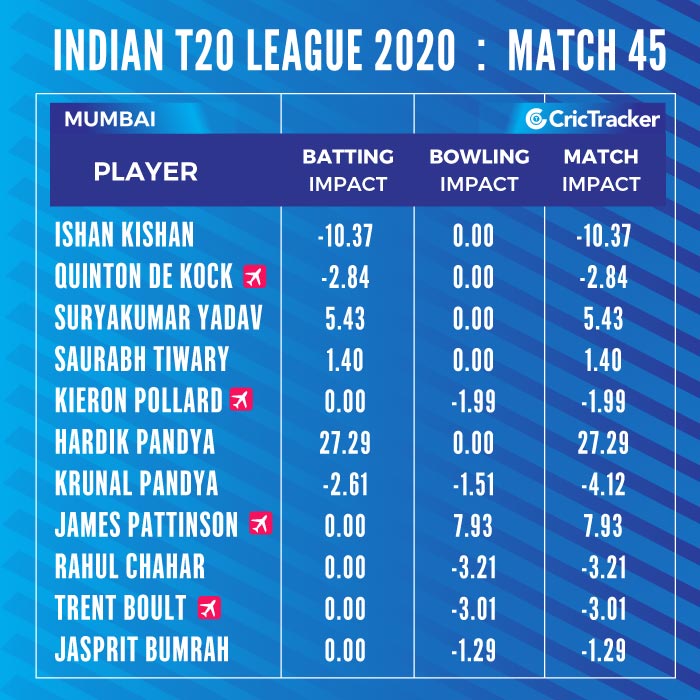