Warner, Saha and Rashid were the main men behind SRH's dominance over DC.

Sunrisers Hyderabad passed their first of many stern Tests to reach the playoffs of IPL 2020 by distinction with a record win over Delhi Capitals. Sunrisers, in this process of staying alive in the playoff race, did make a favour to RCB, KKR and KXIP by bringing down the Delhi’s NRR to marginally over 0. They bundled out Delhi Capitals to just 131 after posting a record total of 219/2 in their 20 overs. The big total in SRH vs DC was never possible without aggressive batting display by their openers David Warner (66 off 34) and Wriddhiman Saha (87 off 45).

Saha, who was player of the match for his 87-run knock, also produced the most impactful performance as per CricTracker’s Match Impact Rating. Wriddhiman got an impact rating of 26.90 while his skipper Warner got 20.60 for his fifty which came before the completion of the powerplay. Later, it was Rashid Khan’s performance with the ball that kept Delhi to a low total. Rashid’s bowling analyses read 4-0-7-3 which produced an impact rating of +18.37 which was the best among bowlers during SRH vs DC. 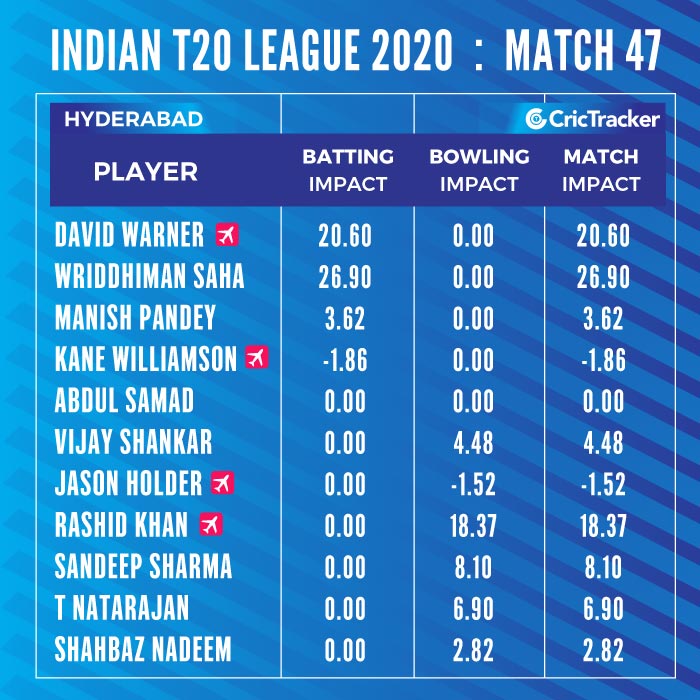 The domination of the Sunrisers Hyderabad on Tuesday can be seen in the impact ratings of the Delhi Capitals’ players. Only as few as four players ended up with a positive impact rating during SRH vs DC.  Anrich Nortje was one of the two bowlers to pick a wicket for Delhi and was the only specialist bowler to concede less than ten an over. The bowling figures of 1/37 got Nortje an impact of +2.23 which was the 2nd best bowling impact rating among Delhi bowlers.

The highest is +3.67 of Marcus Stoinis who was Delhi’s most economical bowler giving 15 runs in two overs. Stoinis got a batting rating of -3.07 which brought down his match impact to +0.60. Ajinkya Rahane registered his highest score of the season with a 19-ball 26 with four boundaries. He was the only specialist Delhi batter with a positive impact of +1.23. Tushar Deshpande’s unbeaten 9-ball 20 at the end fetched him an impact of +9.91 but his match impact comes down to +3.41 which is still the highest for Delhi in SRH vs DC. 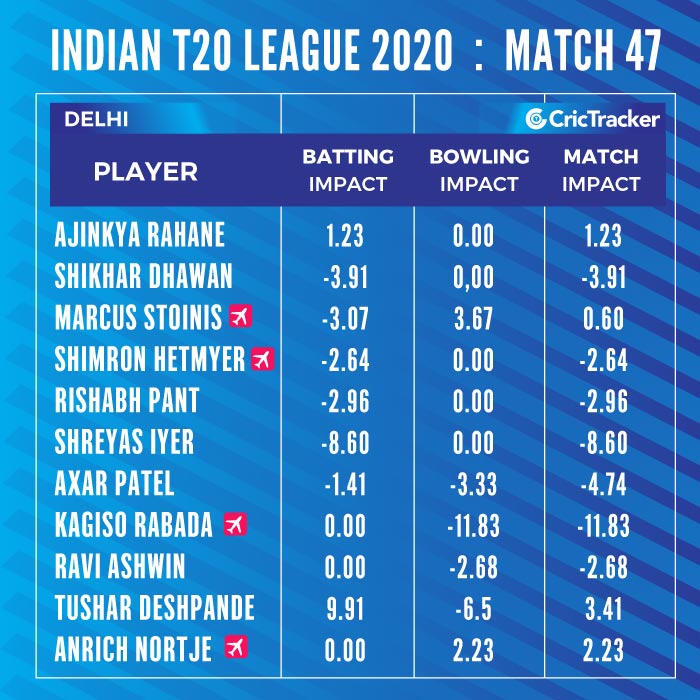