Chennai Super Kings signed off from IPL 2020 with hat-trick wins.

Chennai Super Kings ensured they did not finish at the bottom of the points table with a clinical 9-wicket victory against the Kings XI Punjab in their last league game. The Punjab franchise posted only 153/6 in a game where they needed a win to qualify for the playoffs. Ruturaj Gaikwad’s hat-trick fifty fetched the youngster his hat-trick player of the match award. The CSK opener got an impact rating of +6.86 while his opening partner got an impact of +8.52 for his quick-fire knock in the first half of CSK vs KXIP.

It was Lungi Ngidi whose performance got the highest impact rating for the winning team during the CSK vs KXIP game as per the CricTracker’s Match Impact Ratings. In his opening spell, Lungi conceded only nine runs and claimed the wickets of both KXIP openers, KL Rahul and Mayank Agarwal. Those wickets put Chris Gayle on back foot who crawled to a 19-ball 12 without hitting a boundary before falling to Imran Tahir. Ngidi gave away 30 runs and took a wicket at the death but the bowling effort fetched him +10.76. 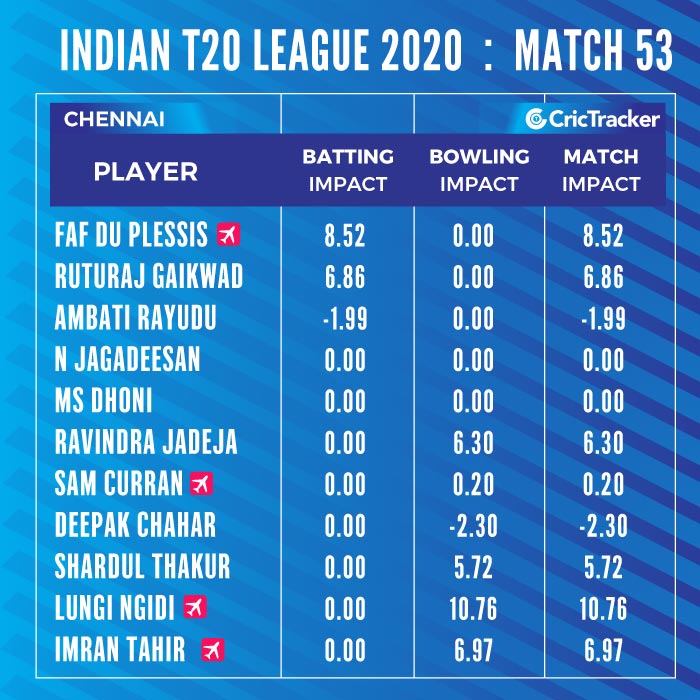 Chris Gayle ended the season with a negative impact of -10.74, which was his first batting failure in the tournament. The Punjab skipper KL Rahul too had a poor finish as his 27-ball 29 got a negative impact of -7.53. Rahul has been on the slower side in most of the KXIP matches resulting in a negative impact for him in most matches despite scoring runs. Among Punjab’s top-order in CSK vs KXIP, only Mayank Agarwal got a positive batting impact rating as he earned +5.34 for his 26 which came in only 15 balls with five boundaries.

The highest impact rating of the match was produced by a Kings XI Punjab player only. Deepak Hooda, who scored his first fifty in the IPL after five years, earned an impact of +27.32. Hooda smashed four sixes and three fours on his way to an unbeaten 30-ball 62. Hooda was the reason why Punjab team finished on 153/6 after they lost their top four at the score of 72 after the completion of 12 overs. Jimmy Neesham got negative impact with both bat and ball during CSK vs KXIP as he got out scoring only two runs and failed to pick a wicket in his opening spell. 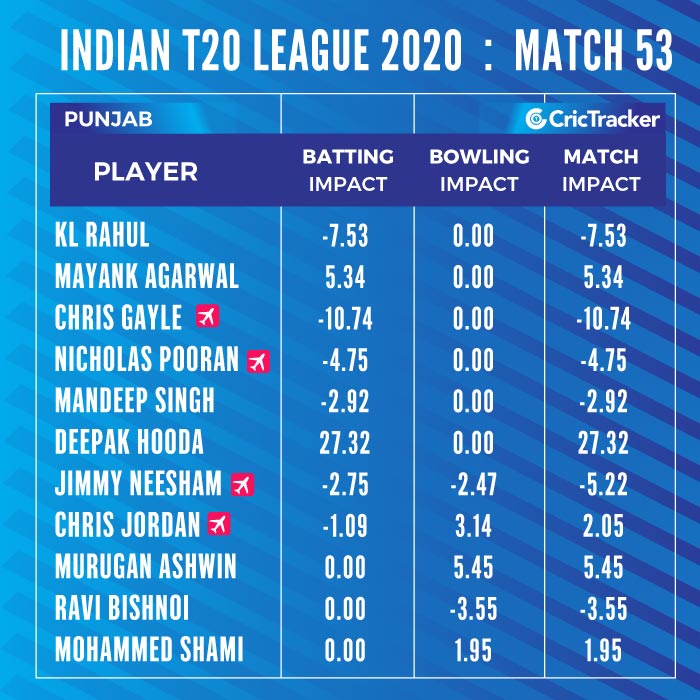