Kolkata Knight Riders are currently placed at No.5 with 12 points after 13 matches.

Kolkata Knight Riders made things worse for themselves after going down in a thriller to the Chennai Super Kings, a game which they should have won comfortably. Defending their total of 172/5, the Knight Riders conceded a 50-run opening stand but it came in 7.3 overs. An aggressive partnership for the 2nd wicket seemed to take the game away from Kolkata before they took three quick wickets. The equation of 27 runs from 9 balls looked pretty tough but Ravindra Jadeja single-handedly took CSK over the line.

With Kolkata Knight Riders’ net run-rate not being among the best ones, their chances of finishing in top four look very bleak unless results of other teams go as they expect. KKR’s last match is on Sunday against Rajasthan Royals which is a do-or-die clash for them. The two-time champions will be out of the playoff race if they lose it but that doesn’t mean they will be in top four if they win it even by a slightly bigger margin. 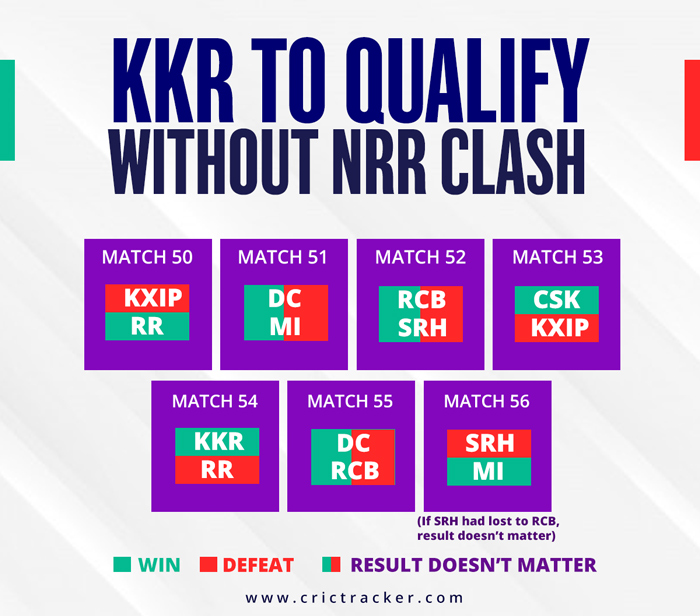 The best possible way in which Kolkata can get into the playoffs is without a clash on NRR. This means they would need Kings XI Punjab, Rajasthan Royals and Sunrisers Hyderabad to finish with less than seven wins. It will happen only if Sunrisers Hyderabad loses one of their next two fixtures and also Punjab has to lose their next two matches against Royals and Chennai Super Kings. As said, this case won’t work if they don’t get two points from their last match irrespective of the winning margin. 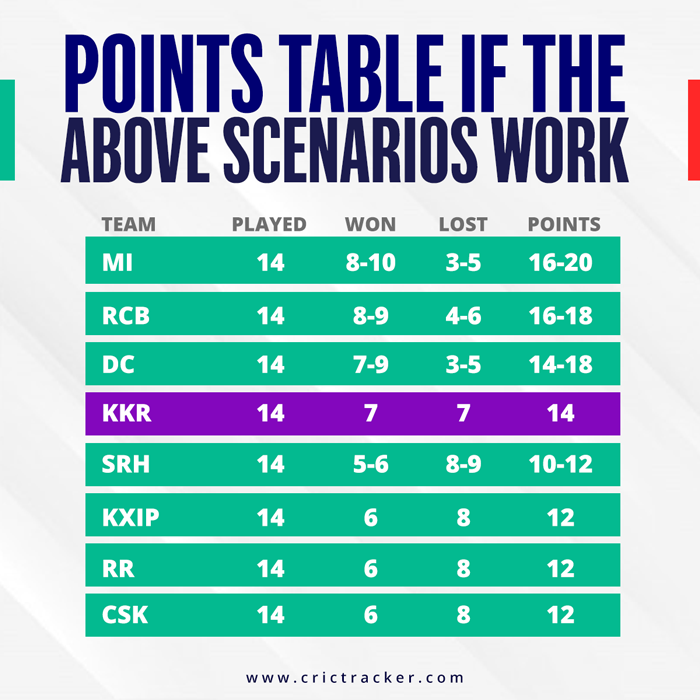 Calculators will be in action during the Sunday’s match between Kolkata Knight Riders and Rajasthan Royals if the KKR team aims to finish ahead of other teams in the net run-rate column. It will be near impossible for Kolkata if two of RCB, DC and KXIP finish with more than 14 points and Sunrisers Hyderabad ends on with 14 points. Currently, Kolkata’s NRR is -0.467 while Sunrisers’ NRR is +0.396. KKR will need no less than 240-run margin win over RR even if we assume SRH win their next two games by a collective margin of 30 runs.

Kolkata does have a far better chance in getting over the net run-rate of Bangalore, Delhi and Punjab. The tie with Bangalore and Delhi will happen only if one of them lose both their matches that too by big margins. If their margin of defeat is around 15 runs in both outings, Kolkata has to win by around 100 runs or chase the target well inside nine overs. The difference in the NRR of Bangalore, Delhi and Punjab isn’t big as it reads +0.048, +0.030 and -0.049 respectively. 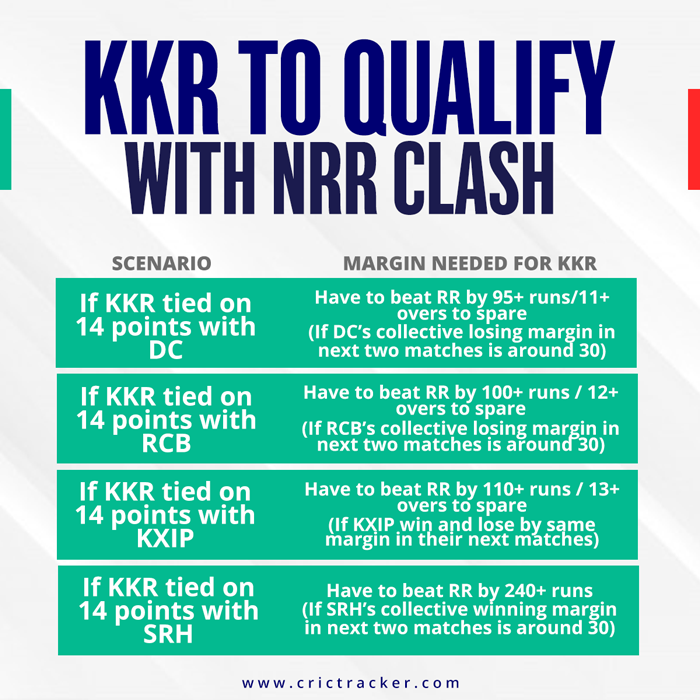 (Scenarios as at the end of Match No.49)