The David Warner-led side has been bolstered by the inclusion of Australian all-rounder Mitchell Marsh and India U19 World Cup skipper Priyam Garg.

As the commencement of IPL 2020 is nearing with every passing day, the excitement of fans is also notching up. Every cricket fanatic is eager to witness the T20 extravaganza in the UAE this year.

All fans were eagerly waiting for the IPL 2020 schedule to roll out by the end of August but it was pushed further after multiple Chennai Super Kings’ members tested positive for coronavirus. Overcoming all the hurdles, the BCCI finally rolled out the IPL 2020 schedule on Sunday. The much-awaited schedule has as many as 10 afternoon games to give time to the teams to travel.

All matches are slated to take place in Dubai, Sharjah and Abu Dhabi. The afternoon matches are set to begin at 3:30 PM IST while the evening games will start at 7:30 PM IST. As per the tradition, defending champions Mumbai Indians will lock horns with Chennai Super Kings in the season opener.

One of the favourites to clinch the IPL 2020 trophy, Sunrisers Hyderabad will begin their campaign by battling with Royal Challengers Bangalore on 21st September at Dubai International Cricket Stadium. SRH’s next two matches in September will be against Kolkata Knight Riders and Delhi Capitals on 26th and 29th respectively.

Sunrisers Hyderabad had clinched their maiden IPL trophy back in 2016

SRH’s title pursuit will further continue on 13th October as they will line up again versus Chennai Super Kings. On 18th, 22nd and 24th October, the Hyderabad franchise is scheduled to play Kolkata Knight Riders, Rajasthan Royals and Kings XI Punjab respectively.

SRH will end October by clashing against Delhi Capitals and Royal Challengers Bangalore on 27th and 31st respectively. The Orange Army will face Mumbai Indians in their last league stage game, scheduled on 3rd November at the Sharjah Cricket stadium.

The David Warner-led side has been bolstered by the inclusion of Australian all-rounder Mitchell Marsh and India U19 World Cup skipper Priyam Garg. After clinching their maiden IPL title in 2016, Warner and Co will be aiming to add another trophy in their vitrine. 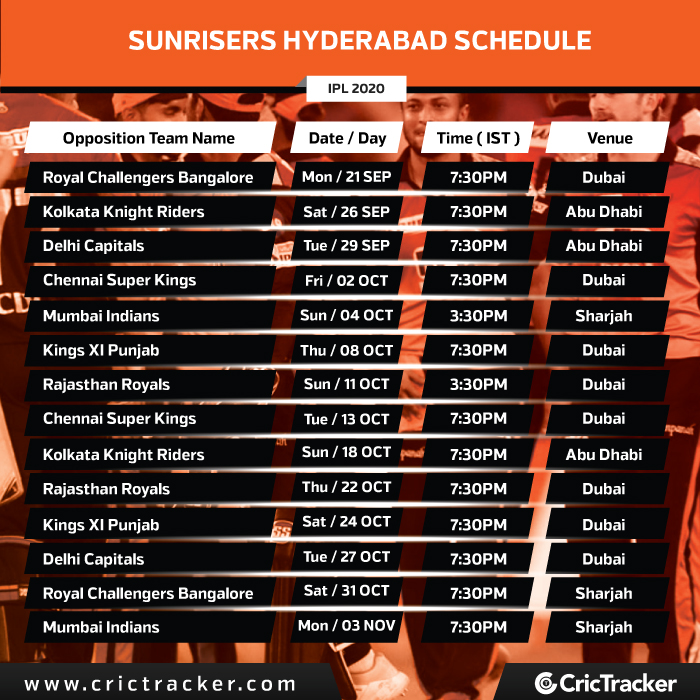