Arjun Tendulkar who made his debut for Mumbai earlier this year was bought by the Mumbai Indians franchise in IPL 2021 auction.

Former Indian cricketer Sachin Tendulkar’s son Arjun Tendulkar was picked up by Mumbai Indians at the IPL 2021 auction for his base price of INR 20 Lakhs. Having played a few matches for his state team Mumbai, Arjun, who is a left-arm pacer and a left-handed lower-order batter found his way into the Mumbai Indians team.

However, during the entire first phase of the Indian Premier League 2021, the 21-year-old warmed the bench. But, ahead of the second leg of the tournament which is supposed to be held in the United Arab Emirates, the young cricketer seems to be desperate to make it to the first XI for the Rohit Sharma-led team.

Zaheer Khan, who is the Director of Cricket operations of Mumbai Indians gave important tips to the Junior Tendulkar a few days ago. On Monday, the senior pacer Dhawal Kulkarni was also seen giving essential tricks and imparting knowledge to Arjun. The young pacer has played only two T20 matches so far for Mumbai, during the Syed Mushtaq Ali T20 Trophy earlier this year.

Mumbai Indians to resume their campaign against Chennai Super Kings

Mumbai Indians contingent with some important players have already arrived on the shores of the United Arab Emirates. The team is currently having its training sessions at the Sheikh Zayed Cricket Stadium in Abu Dhabi. Arjun Tendulkar uploaded a story on Instagram in which he was seen practicing hard with his Mumbai Indians teammates.

Dhawal Kulkarni featured in his story, giving an idea of how Arjun has been seeking advice from senior players. Talking about Arjun’s playing style, the young player is predominantly a fast-bowler with some skills of batting as well. He was seen smashing oppositions during the DY Patil T20 tournament, which is a local annual tournament played in Navi Mumbai’s DY Patil stadium. 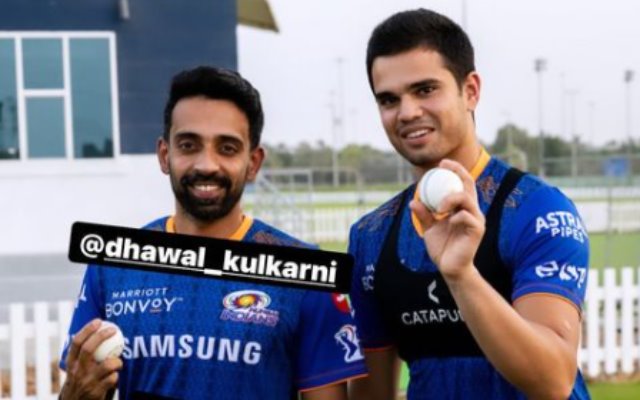 Before the Mumbai Indians team left for the UAE, they had a camp for domestic players at the Jio Stadium in Reliance Corporate Park. Arjun was a part of that camp as well. Mumbai Indians will play the first game of the second phase of IPL 2021. They will begin their campaign on September 19 in Abu Dhabi, against their popular rivals Chennai Super Kings.