Russell, Gill and Buttler are good options to make C and VC. 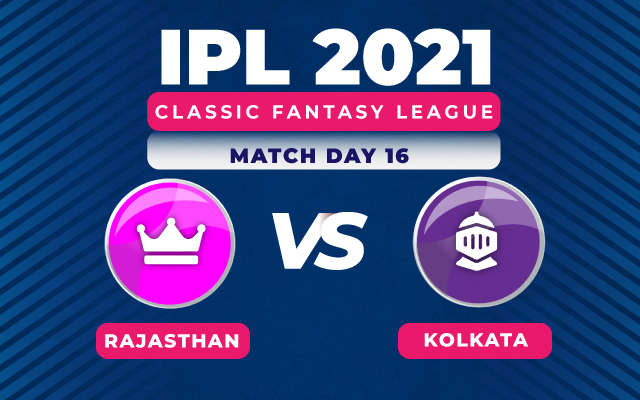 The 18th match in this IPL 2021 season will start at 7:30 PM IST, between Rajasthan Royals (RR) and Kolkata Knight Riders (KKR) in Mumbai. In this article, let us discuss the Season Long Fantasy League team setup for Match 17.

Both the teams have won just one match in this season and lost three matches. KKR have lost their previous match. However, that match showed their batting depth with the likes of Dinesh Karthik, Andre Russel and Pat Cummins scoring runs. If KKR top order batsmen manage to stop too many wickets falling in the first ten overs, their middle order can take care of accelerating the run rate. On the other hand, RR is struggling big time with both their batting and bowling.

For both the teams, this is their last match in Mumbai, before they move to their new venue. This is one good opportunity for the stroke makers from both sides to come into form. RR are taking a long break of six matches before they play their next match. Since RR played their match a day before, most of the fantasy teams might be having the players from RR.

Note: In the last match, Murugan Ashwin did not play. We don’t have an uncapped player fitting in the budget of 7 Credits. So, we didn’t make any transfers in the last match.

Number of Transfers: None (+ One Uncapped)

Transfer Out: Suryakumar Yadav (MI): Mumbai Indians are taking a long break before their next match. So we are transferring him out.

Andre Russell usually comes down the order when KKR is chasing. He will come up the order, when KKR bats first. He is bowling couple of overs as well. Considering his all round potential, we are making him as Captain if KKR bats first.

Dew factor in Mumbai helping the teams batting second. Accordingly we have selected Shubman Gill and Jos Buttler as our Captain/Vice Captain. A good innings is due from Shubman Gill. He could be a differential for this match as many fantasy teams might not have him in their teams due to his poor show this season so far.