3X Triple Booster can be used for CSK vs RCB game. 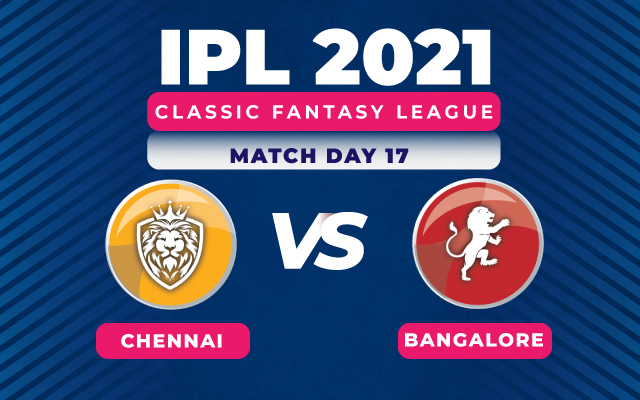 The third double-header in the IPL season 2021 begins on 25th April. The first match is between Chennai Super Kings (CSK) vs Royal Challengers Bangalore (RCB) at 3:30 PM IST in Mumbai. The second match of the day starts at 7:30 pm between Sunrisers Hyderabad (SRH) vs Delhi Capitals (DC) in Chennai. This is a two-part article covering the Season Long Fantasy League team setup for both the matches, Match 19 and 20.

This is the contest between table toppers this season that most of the IPL fans have been waiting for. The Kohli’s team is yet to taste a defeat this season. CSK has won three out of their four matches. Both the teams are in good form in both the batting and bowling departments. This is the last match for both the teams in Mumbai, before they move to their new venues for their next matches.

These are one-off transfers and we are going to transfer them out after this match. We have saved few transfers in the previous matches. So, we are ok to spend those transfers in this match as these players are in-form and the venue is high scoring one.

Jos Buttler (RR), Sanju Samson (RR): Considering the long gap before RR’s next match, we are transferring these two RR players out.

Nitish Rana (KKR): We can get Nitish Rana for KKR’s next match using free uncapped transfer.

Moeen Ali (CSK): Moeen Ali is this season’s great fantasy option considering that he is batting in first down and bowling few overs. He is a must pick for all CSK matches. RCB do not have many left handers in their batting order. So he might not bowl his full quota. He needs to overcome the short ball threat from RCB’s tall pacer Kyle Jamieson.

Faf Du Plesis (CSK): Faf batted well in the previous match. RCB bowlers are picking up early wickets regularly this season. So, there is a bit of threat for him. So choose your transfer accordingly.

Other Players: This match features many good players whom we could not transfer in our fantasy team. The order of preference is 1) Virat Kohli (RCB) 2) AB De Villiers (RCB) 3) Ravindra Jadeja (CSK) 4) Sam Curran (CSK) 5) Deepak Chahar (CSK)

Devdutt Padikkal (RCB): Devdutt Padikkal scored a brilliant century in the last match. If he escapes the threat from Deepak Chahar initially, he should be scoring good again.

Other Players: Shahbaz Ahmed (RCB), Ruturaj Gaikwad (CSK) are other uncapped players if you want to consider.

Our Fantasy team for Match 19

Captain: Moeen Ali (CSK) We chose to Captain Moeen Ali due to his all round fantasy potential

Vice Captain: Glen Maxwell (RCB) If CSK causes early blows to RCB, he will get some good batting time to make a good impact.

3X Booster Alert: This season, we have a 3X booster, where we can earn triple fantasy points for a player. This player is in addition to the Captain and Vice Captain. As this match features good players like Virat, Maxwell, ABD, Faf, Moeen Ali, you can consider using the booster based on the pitch report and the players available in your fantasy team. We are planning to  use this 3X booster in Bangalore matches. 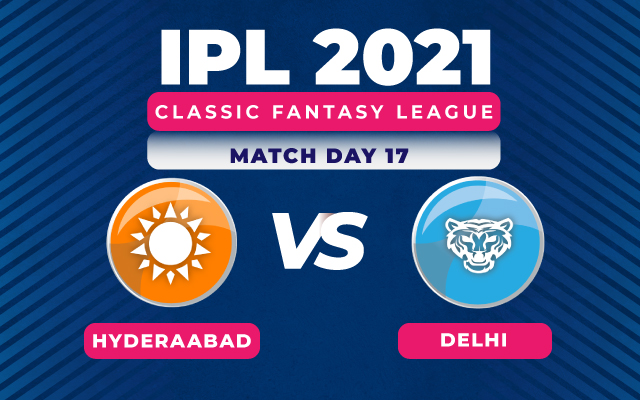 SRH has finally managed to win their first match this season, where as DC has won three matches and lost one this season so far. Return of Axar Patel strengthens the Delhi team setup. It will be interesting to see who will be left out in the final XI among Amit Mishra, Lalit Yadav and Axar Patel.

SRH made some bold moves in the last match by leaving out the expensive Manish Pandey. Return of Williamson is an exciting news for SRH fans. For both these teams, this is the last match in Chennai this season, before they play their next matches at new venues.

DC plays their next two matches in three days and SRH plays their next two matches in four days. So we should try to get as many players as possible from these two teams. We do not have any player from these two teams in our season fantasy team. We will make three transfers for this match to get in few good players for this match.

Players available for the Current Match: None

Number of Transfers: Three (+ One Uncapped)

Moeen Ali (CSK), Faf Du Plesis (CSK): As we mentioned in the Match 19, we brought both of them just for one match and we are transferring them out as Chennai has four match gap. Before CSK plays their next match, DC plays two matches.

Chetan Sakariya (RR): RR is having a long break. So we are happy to transfer out all RR players

Shikhar Dhawan (DC): Shikhar Dhawan is in brilliant form. His controlled batting approach is likely to give consistent fantasy returns. He is a must have for any DC matches.

Prithvi Shaw (DC): Our second choice for a DC player is Kagiso Rabada/Rishabh Pant. However they are expensive at 10.5 and 10 Credits respectively. Since we could not accommodate them due to our team combination, we have settled with Prithvi Shaw. He plays too aggressive shots even before he settles in. That often makes him loose his wicket very early.

Our Fantasy team for Match 20

Avesh Khan (DC): Avesh Khan is taking wickets regularly so far this season. So he is our first uncapped preference for this match.