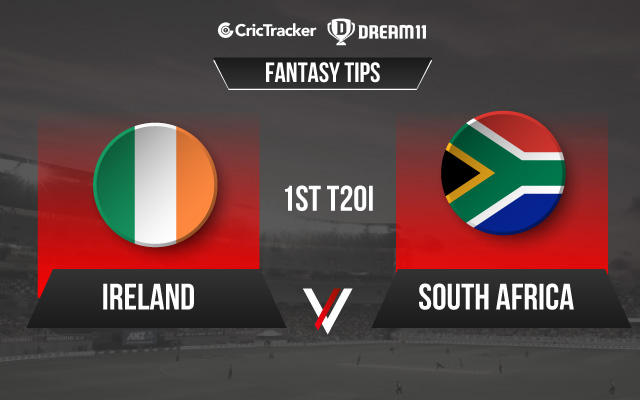 Ireland will take on South Africa in the 1st of the 3-match T20I series, which is starting from 19th July. Both the teams have had their success in the ODIs, as each team ended up winning one game, whereas one game was washed due to rain. Ireland now has the ability to win games against any side in the world, they showed a lot of promise in the ODIs which was evidence of it.

Meanwhile, South Africa will look to keep things simple. They would want to apply the same formula as they did in the West Indies tour, where they won the series 3-2. Quinton de Kock, who had played only one game in the ODI series, is likely to open the innings for South Africa in the 1st T20I. Both the teams are well balanced and we can expect a cracker of a contest between them.

It’s an out-and-out batting track. The short boundaries will make the batter’s game much easier in this format. The quick bowlers can make use of the short deliveries as a wicket-taking option. Whoever wins the toss should bat first.

Paul Stirling has played a lot of T20 leagues around and is very familiar with the Irish conditions. He is an aggressive batter, who has scored 2124 runs in 77 T20I innings at an average of 29.27. Stirling has the highest score of 95.

Aiden Markram was the player of the match in the final T20I game against West Indies, where he scored 70 runs from 48 balls. Overall in his T20I career, he has notched 310 runs at an average of 34.44.

Simi Singh showed a lot of fight in the 3rd ODI and brought up his 1st ODI century. He is an experienced campaigner, who has played 24 T20Is. Singh has scored 207 runs and has also picked up 21 wickets.

Josh Little had a decent series with the ball in the ODIs against South Africa by picking up 4 wickets in 2 innings. The 21-year-old left-arm quick from Dublin has played 17 T20Is and has picked up 11 wickets, with the best figures of 3 for 29.

Tabraiz Shamsi was the player of the series in the T20I series against West Indies. He was the most economical bowler in that series, where he conceded 4 runs an over and picked up 7 wickets.

Quinton de Kock had a successful T20I series against West Indies, where he ended up as the leading run-scorer. He scored 255 runs in 5 matches at an average of 51.

Andrew Balbirnie led the side really well in the ODIs. He scored 945 runs in his 39 T20I innings at an average of 25.54. It’s worth a risk to pick him as your fantasy team skipper.

Since Quinton de Kock is the frontline wicketkeeping option, you can avoid Lorcan Tucker while making your fantasy teams.