Bangladesh may make a few changes despite victory in the last match.

Bangladesh lost their warm-up match to the Ireland Wolves by 88 runs but made a stupendous comeback against Windies in the 1st ODI winning the contest by eight wickets in the at the Clontarf Cricket Club Ground, Dublin. The Tigers’ bowlers strained in the first half of the Windies innings, but they made an incredible comeback, restricting Jason Holder and Co for 261. Tamim Iqbal and Soumya Sarkar set the platform.

Both scored half-centuries after which Shakib Al Hasan and Mushfiqur Rahim took Bangladesh home. Their next game is scheduled against Ireland tomorrow at The Village in Dublin. The Irishmen had a forgettable outing versus Windies as they lost by 196 runs. William Porterfield’s men were outplayed in all the departments and rolling over the Tigers won’t be a cakewalk by any means.

The venue is set to host its first game in the series. The track has been a tad inconsistent ever since the first game was played in 2013. Out of 11 completed matches, five were won by the team, batting first. However, batting second can be a wise choice, bearing in mind the strength of the teams.

It didn’t rain the other day in Dublin despite the forecast of a downpour. Even tomorrow, chances of rain are extremely high and the atmosphere is expected to be gloomy. The temperature will be hovering around the 7-degree mark. The humidity will be on the other higher side.

The hosts may bring in James McCollum in place of Lorcan Tucker, who got a four-ball duck in the last match. McCollum notched a century in the warm-up match versus the Tigers. Mark Adair gave 84 runs and he may make way for Boyd Rankin. Kevin O’Brien scored a fifty the other day and Ireland will be looking up to the experienced batsman to deliver.

Bangladesh are likely to give Taskin Ahmed an opportunity in place of Mustafizur Rahman, who leaked runs last time at an economy of 8.4. Taskin was decent in the warm-up, having got three wickets. Also with a 19-member squad, the Tigers may rest Soumya Sarkar and give Liton Das a chance. Mashrafe picked up three wickets last time and will want to lead his team to another victory.

Stirling has been a prolific performer in Ireland over the last decade. He had an off-day versus the Windies. The 28-year-old got a golden duck, getting castled by Kemar Roach. With the ball, he couldn’t get a wicket in his two overs. If Ireland are to make a comeback in their next outing, the experienced Stirling has to get a big score under his belt.

The all-rounder had a decent match against the Windies. He scored a run-a-ball 61 and also picked up the crucial wicket of Darren Bravo. He was also Bangladesh’s most economical bowler. Even in the warm-up match, he was frugal with the ball and notched a fifty under his belt. If Bangladesh lose early wickets or leak runs then Shakib may have a more critical role to play. 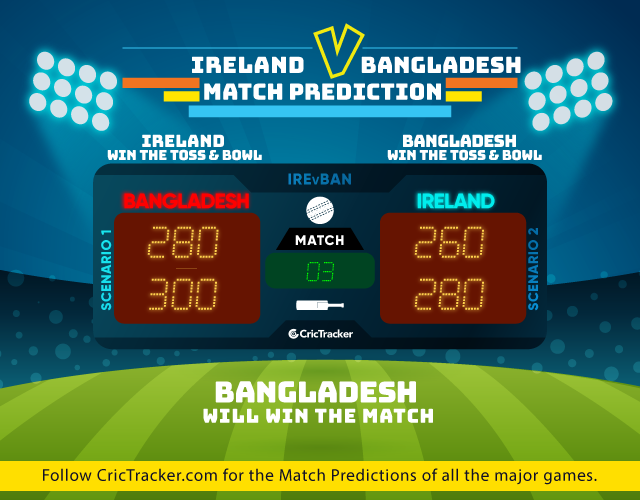