Who would you pick as your captain?

Yesterday, Windies beat Ireland by five wickets and qualified for the final of the tri-nation series. For them, the game won’t have much of a significance and the Caribbean team may give their reserves an opportunity. Their batting has been reasonable, but their bowling has looked a tad clueless when put under pressure. Jason Holder & Co are next scheduled to play Bangladesh at The Village in Dublin.

The Tigers, on the other hand, are sitting pretty with six points. Their last game versus Ireland was washed out. With a squad of 19 in their ranks and a maximum of three games left before the World Cup, Bangladesh has a lot of thinking to do. For the time being, Mashrafe Mortaza’s men need only one victory in order to book themselves a berth in the final and also knock Ireland out of the tournament.

The 5th game of the Ireland Tri-Nation between Windies and Bangladesh will be hosted by The Village in Dublin.

Fortunately, there’s no prediction of rain for tomorrow’s contest. There will be a bit of cloud cover, but that won’t cause any harm. The temperature will be around 15 degrees Celsius. The humidity won’t be a matter of concern with the numbers below the 50 per cent mark.

The pitch in Dublin is again expected to be a batting-friendly one. Last time, Ireland and the Windies aggregated over 650 runs and bowlers were literally taken apart. The next game is speculated to be no different.

John Campbell missed two games in a row due to a sore back and there’s no update yet on his injury. 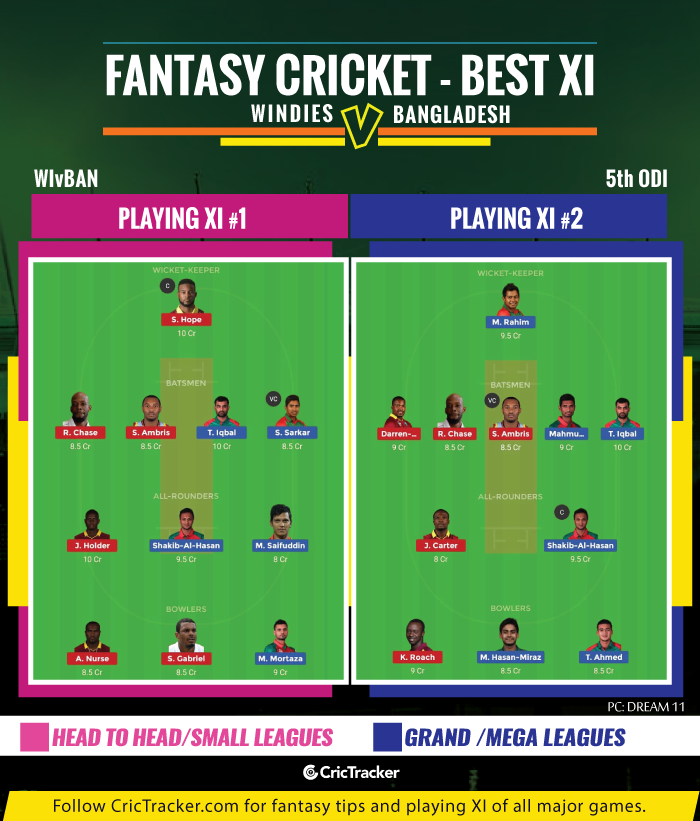 Pick more top order batsmen from both the teams and more of Bangladesh bowlers.