Spinners will play a huge role in this contest.

This is the third match of the Double Header of Oman Quadrangular series between the full member status cricket team (Ireland) and its neighbouring country Scotland. Scotland are Coming off their victory in the T20I tri-series held in the Netherlands last June combined with their status as the highest ranked side in  Al Amerat, Oman. Although they lost the first match by the Dutch, but the world 11th rank (T20I) team will be confident to beat strong Ireland team

On the Other Hand, Gary Wilson’s absence has thrust Paul Stirling into the role of stand-in captain which has improved his game as he was leading from the front in the match against Oman.  The experiment to move Kevin O’Brien at the top of the order has worked well so they are likely to stick to this explosive opening pair.

In the Bowling front, Young left armer Joshua Little was exceptional as he took 2 wickets at an economy of 6 runs against the Omani’s. Along with him the Off-spinner Simi Singh also proved his mettle by taking 3 wickets. Both the teams are looking strong on paper but whichever team held nerves will better, will claim this match.

Spinners will play a huge role in this match as all the matches are played in this 22 yard Strip. More wear and tear is expected as this will be played after the Oman and Netherland encounter

Hamza Tahir might come in for Ruaidhri Smith as spinners will play a huge role in this match.

Simi Singh can be a great pick for your fantasy leagues as he can deceive the batsman with his spin bowling and can be a sensible batsman as or when required. 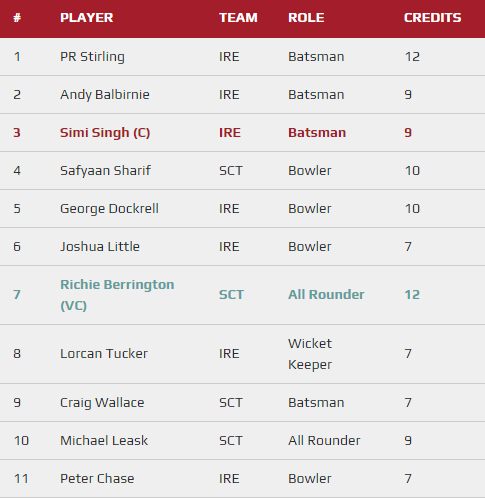