Andre Russell's signing is the biggest boost for Quetta Gladiators. 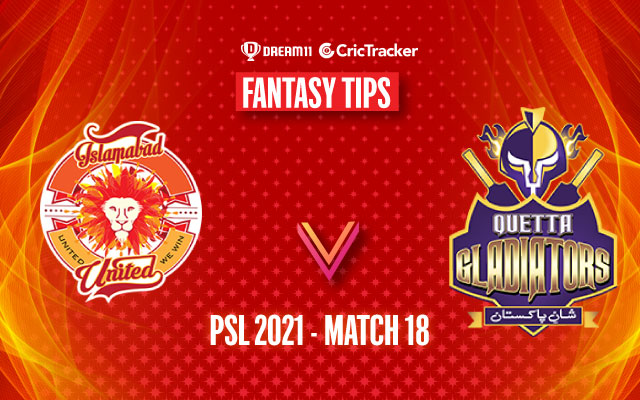 The last-over blunder against the Lahore Qalandars cost Islamabad United a shot at victory in their previous match, where they lost the match by 5 wickets. One of their main players, Faheem Ashraf is likely to miss this match against the Quetta Gladiators due to injury. Currently, United are at 3rd spot in the standings with 6 points.

Quetta Gladiators are desperate for the win as they are sitting at the bottom of the table with 2 points. The inclusion of star campaigner Andre Russell may change their fortunes in the 2nd leg and even Faf du Plessis’ current form will help them.

By looking at the last 3 matches played here, the surface looks more balanced with equal help for both batters and bowlers. It’s difficult to chase a score of more than 160 and whoever wins the toss should opt to bat first.

Colin Munro is an excellent T20 batter. Once he gets set, it’s difficult to dismiss him. He departed early for just 11 runs against Lahore Qalandars, but he still is a good buy for your fantasy teams.

Faf du Plessis had a good IPL for Chennai Super Kings and would like to carry the same form in PSL as well. He has played 3 matches in PSL 2021 and scored 71 runs in 3 matches at a strike rate of 131.48.

Iftikhar Ahmed is a clever budget pick at 8.5 credits. He is a handy customer in the middle order and even can provide quick overs with the ball for his captain. He has scored 69 runs in 4 innings so far in this league.

Andre Russell’s signing is the biggest boost for Quetta Gladiators. West Indian all-rounder can smack the ball easily, and not to forget, he can pick wickets at crucial times.

Hasan Ali bowled well in the last game against the Lahore Qalandars, picking up 2 wickets at an economy of 6.8. Overall in this year’s league, he has scalped 8 wickets in 5 matches with the best figures of 2 for 14.

Mohammad Hasnain is a talented young pacer who bowls at a good pace. He has picked up 6 wickets in 5 matches so far in this year’s league at an economy of 8.33.

Quetta Gladiators skipper Sarfaraz Ahmed is the leading run-scorer for his side in this tournament, scoring 185 runs in 5 matches at an average of 37 and a strike rate of 146.82.

ISL vs QUE Must Picks for Dream11 Fantasy Cricket:

Hasan Ali has scalped most wickets for Islamabad United in this year’s league. Since he is a bowler it’s risky to pick him as your fantasy team skipper.

Caribbean all-rounder Andre Russell usually takes some time to get going for any team he plays. S, since he is playing for the first time in PSL, it’s risky to pick him as your fantasy team skipper.

Hussain Talat has done a decent job in this year’s PSL, scoring 89 runs in 5 matches and even picked up one wicket. Considering too much competition in the all-rounder’s slot you can avoid him while making your fantasy teams.