Both teams have already made their way through to the semis.

Jaffna Stallions have already made their way through to the semi-final of the LPL 2020. Winning their first four matches, the team, captained by Thisara Perera, qualified for the next round. However, the fact that they lost their previous game to the Colombo Kings should give them a heads-up.

Despite the defeat, Jaffna, still, have a net run rate of 1.243, the best among the others. The Viiking, on the other hand, have qualified for the semis after they beat the Galle Gladiators by nine runs on Saturday.

But Dasun Shanaka and Co need to take care of their bowling department that went under the pump in the previous encounter. When Jaffna and the Viiking met earlier in the tournament, it was the former, who emerged victorious by 66 runs after posting 218 runs on board.

The pitch in Hambantota has been a belter for batting thus far in the tournament. The bowlers haven’t had much to cheer for as scores of over 200 have been accomplished on quite a few instances.

Another high-scoring match seems to be in the offing. There are chances of rain around 8 PM and hence, there could be interruptions. The clouds will be there with the temperature at 27 degrees.

Playing Combinations for JAF vs DAM

What happened in the cricket world today - June 21

Wanindu Hasaranga has been outstanding for the Stallions in the LPL 2020. The youngster has delivered, both with bat and ball. In four innings, he has scored 87 runs at a strike-rate of 197.72.

With his leg-breaks, he has been tough to face. The tweaker is the leading wicket-taker for the Stallions with nine wickets at an economy of 5.25- the best among the other bowlers in his team.

Dasun Shanaka is currently the leading run-scorer for the Viiking in the tournament. He mostly bats in the middle-order and gives his team the impetus that they require.

In five games, the hard-hitting batter has 234 runs at an average and strike-rate of 46.80 and 172.05 respectively. In the last game against the Gladiators, he also got amongst the wickets, dismissing Azam Khan at a crucial stage. 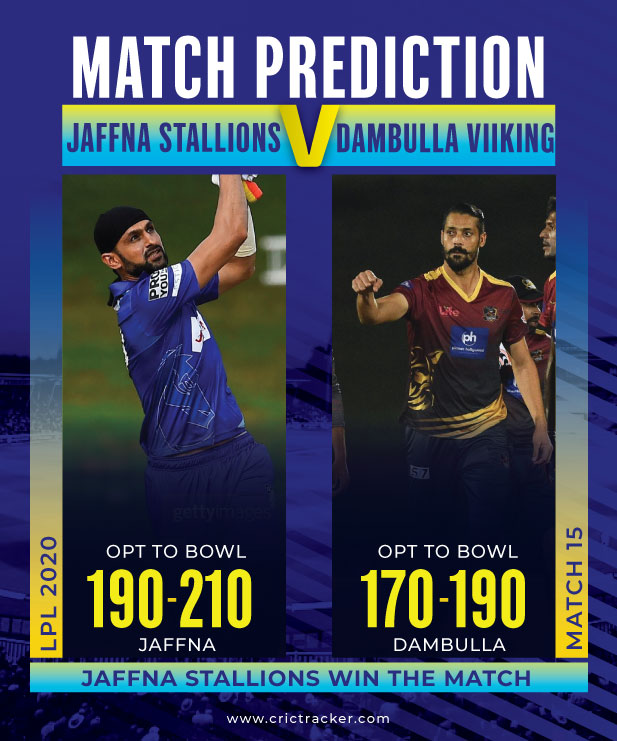