There are chances of rain around 6 PM in the evening, but the skies are expected to clear by match time.

After loads of speculations, the inaugural edition of the Lanka Premier League got underway on Thursday, November 26 with the match between Colombo Kings and Kandy Tuskers. In the second match of the T20 tournament, Jaffna Stallions and the Galle Gladiators would be locking horns on Friday, November 27 at the Mahinda Rajapaksha International Stadium in Hambantota.

The Gladiators were faced with mini trouble after it was known that Shahid Afridi, their skipper, missed his flight. However, on November 24, he took the flight, but he might not play the first game due to the quarantine protocols.

The Gladiators won’t be having Lasith Malinga, who earlier pulled out of the tournament. The Stallions, on the other hand, have a star-studded lineup in their ranks.

The venue in Hambantota hosted a few ODIs in recent times. But as far as the T20 format is concerned, not a single has been played here since the year 2013.

Hence, teams would be better of fielding first and seeing how the pitch behaves before coming out to chase the target. There are chances of rain at 6 PM, but the skies are expected to clear by the time the match gets underway.

Playing Combinations for JAF vs GAL

Avishka Fernando has come up the ranks over the last 16 months or so. The right-hander has flourished in the limited-overs formats and also did well for the Lankans in the 2019 World Cup. The youngster doesn’t mind throwing caution to the wind.

If he gets going, he will be hard to stop. The Gladiators have a power-packed bowling unit and they will be looking to get the opener at the earliest.

Mohammad Amir hasn’t been included for the tour of New Zealand and the Gladiators will be looking to make optimum utilisation of his services. The left-arm pacer is a genuine wicket-taker and can ruffle a lot of feathers.

The speedster will mostly be in charge in the powerplay and death overs. It will be interesting to see how the Stallions’ batters face him and strategise against the pacer.

The prediction is for Galle Gladiators to win the match. 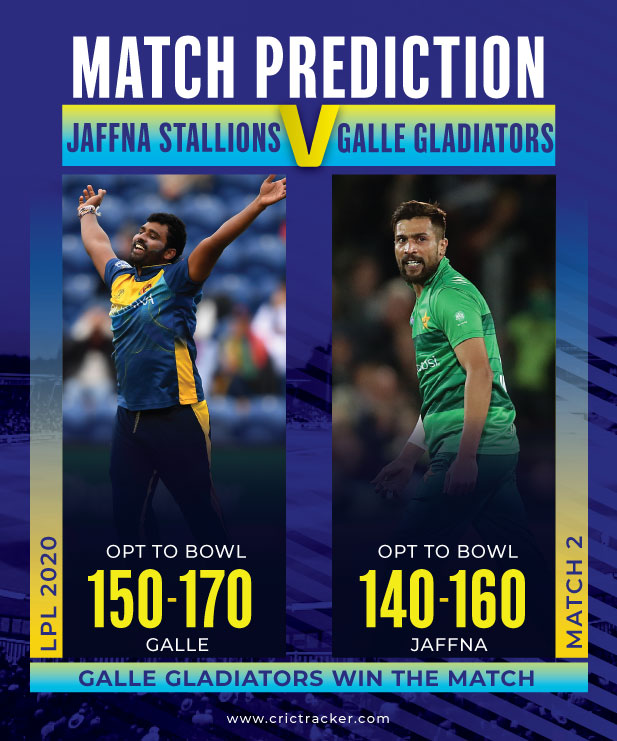