In their previous meeting, the Stallions beat the Tuskers by 54 runs.

Kandy Tuskers held on to the fourth spot in the points table for quite a while in the inaugural Lanka Premier League. However, Galle Gladiators’ victory over Colombo Kings pushed the Tuskers down to the bottom of the points.

Moreover, the fact they registered the lowest score of 105 in the LPL won’t be keeping them in good stead. The Tuskers will next be facing the Jaffna Stallions on Wednesday. In their previous meeting, the Stallions beat them by 54 runs at the Mahinda Rajapaksha Stadium in Hambantota.

The Stallions, led by Thisara Perera, on the other hand, haven’t seen the face of victory for the last two matches, yet they are at the top of the table.

Their only defeat came against the Kings. The Stallions have already made their way to the semis and they would want to continue their dominance.

The pitch in Hambantota has been an absolute belter for batting. Bowlers haven’t had much in it for them thus far in the tournament. Since it’s a day game, teams may opt to bat first and then exert pressure on the opposition in the second half.

There will be six per cent chance of rain during game-time. The temperature will be around 30 degrees Celsius with the humidity mostly in the high-50s.

Playing Combinations for KAN vs JAF

Kusal Perera hasn’t had the best of tournaments with the bat in hand. The left-hander has given sparks of brilliance but hasn’t been able to make full utilisation of his potential.

Avishka Fernando has come up the ranks in Sri Lankan cricket over the last couple of years or so. He is known for his attacking batting in the first six overs when the fielding restrictions are on.

However, in the LPL, he has shown a great deal of maturity and has notched 209 runs at an average and strike-rate of 52.25 and 136.50 respectively. He has been a key performer for the Stallions. 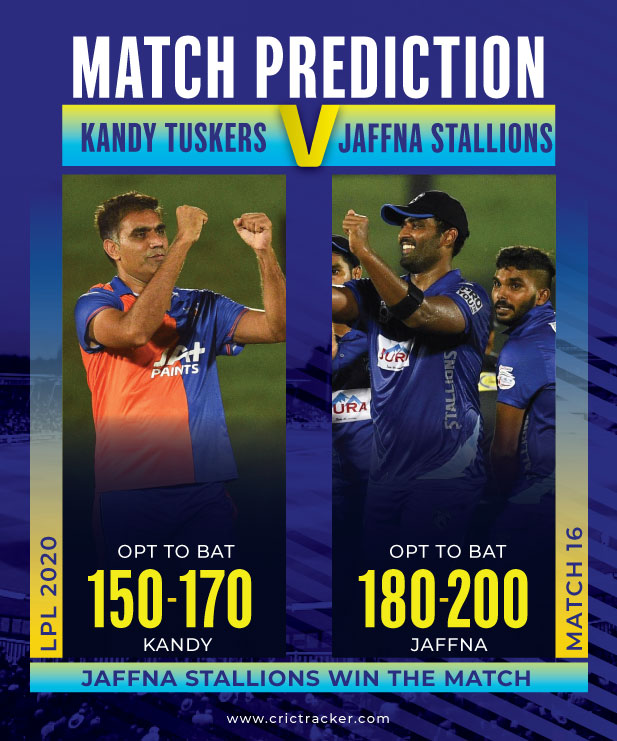