The Kings XI are breathing down KKR's neck in the points table.

Kolkata Knight Riders (KKR) got back to winning ways after defeating the Delhi Capitals (DC) by 59 runs at the Sheikh Zayed Stadium. It was much needed for them as they went into the contest on the backs of a shambolic eight-wicket defeat at the hands of the Royal Challengers Bangalore (RCB).

However, with their last win, Eoin Morgan and Co strengthened their grip on the fourth position. They will next be facing the Kings XI Punjab (KXIP) on Monday, October 26 at the Sharjah Cricket Stadium. KL Rahul and Co are on a rampage, winning their last four matches.

They are also breathing down KKR’s neck. It’s pertinent to note that the Punjab-based franchise have a better net run rate compared to KKR. In their previous meeting, KKR got over the winning line by a mere two runs.

The pitch in Sharjah isn’t as good for batting as it was even as a couple of matches ago. It has started to assist the bowlers to quite some extent. Even the teams batting second have started to make hay.

However, a decent scoring match can be expected. The playing conditions will be warm with the temperature around the 30 degrees Celsius mark. The humidity is likely to be in the mid-40s.

Playing Combinations for KKR vs KXIP

Dinesh Karthik has blown hot and cold in the 2020 IPL without a shred of a doubt. In 11 games, the former Knights’ skipper has 148 runs at a terrible average and strike-rate of 14.80 and 122.31 respectively.

Nevertheless, he can take heart from his previous knock against the Punjab-based franchise. Back then, the right-hander smashed 58 runs and it turned out to be crucial in the game.

KL Rahul remains as the Orange Cap holder for the time being despite his failure last time around against Sunrisers Hyderabad. With 567 runs at an average of 63, he has looked a class apart from his teammates.

It goes without saying that Rahul needs to stay on top of his game for KXIP to make further progress. In his last game against Knight Riders, he scored 74, though it was in a losing cause.

KKR vs KXIP Head to Head 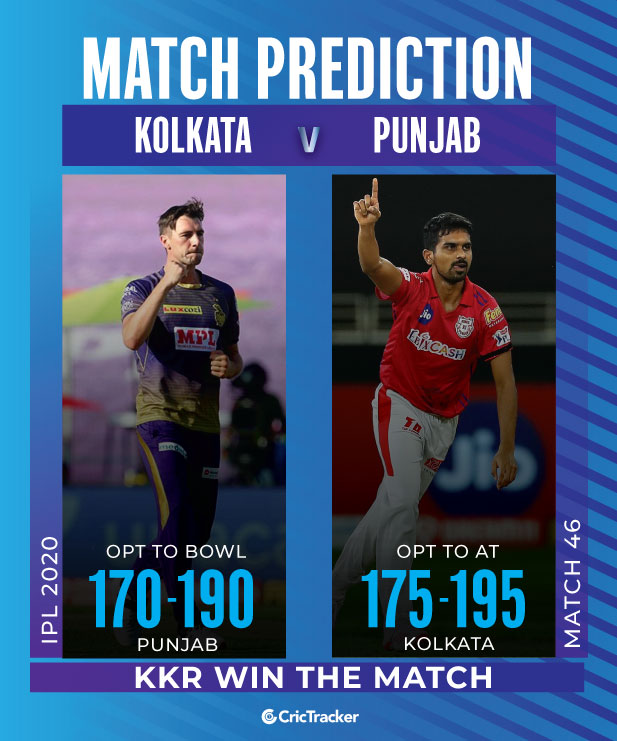