In their last meeting, the Challengers beat KKR by 82 runs.

Royal Challengers Bangalore (RCB), unlike the previous seasons, have performed well in the 2020 edition of the Indian Premier League (IPL). The team, captained by Virat Kohli, are currently placed third in the points table with 12 points from nine games.

In their previous game, they beat Steve Smith’s Rajasthan Royals (RR) by seven wickets at the Dubai International Cricket Stadium. Their next match is against the Kolkata Knight Riders (KKR) on Wednesday, October 21 at the Sheikh Zayed Stadium in Abu Dhabi.

In their previous meeting, RCB thrashed the Knights by 82 runs. But going into the next game, KKR may have the upper hand for their better knowledge of the conditions in Abu Dhabi. In the last game, Eoin Morgan and Co beat Sunrisers Hyderabad in the Super Over.

The pitch in Abu Dhabi has generally been a sporting one. But in the last game between RR and CSK, the bowlers had their say quite a bit. The new ball also moved around quite a bit.

The spinners were hard to get away as well. Chasing should be the way forward. The playing conditions will be warm with the temperature around the 31 degrees Celsius mark. The humidity will be in the high-40s.

Playing Combinations for KKR vs RCB

Lockie Ferguson made a thunderous start to his IPL campaign. The New Zealand speedster ripped through the SRH batting unit, both in the mandatory 20 overs and Super Over.

His performance also earned him the Player of the Match award. It won’t be wrong in saying that the speedster will be at the peak of his powers without a doubt. The Challengers need to play the pacer with intelligence.

Virat Kohli scored only 18 runs in the first three games at a dismal average of 18. However, ever since then, the RCB captain has notched 329 runs from six matches at an average of 109.67.

The 31-year-old, overall, has 347 runs at an average and strike-rate of 57.83 and 122.57 respectively. In his previous game against the Knights, Virat strained a little and he would want to improve on it.

KKR vs RCB Head to Head 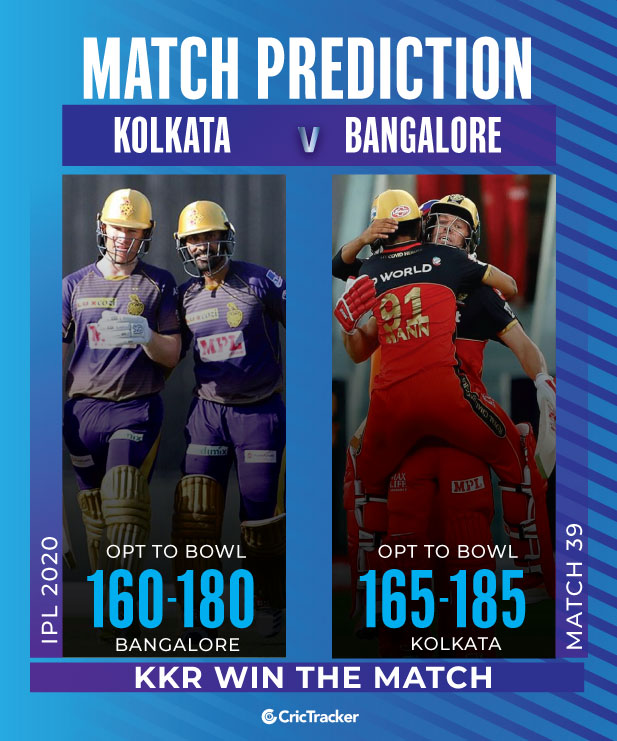