You can watch the entire Dream11 IPL for Free on YuppTV by subscribing to any of the yearly packages. 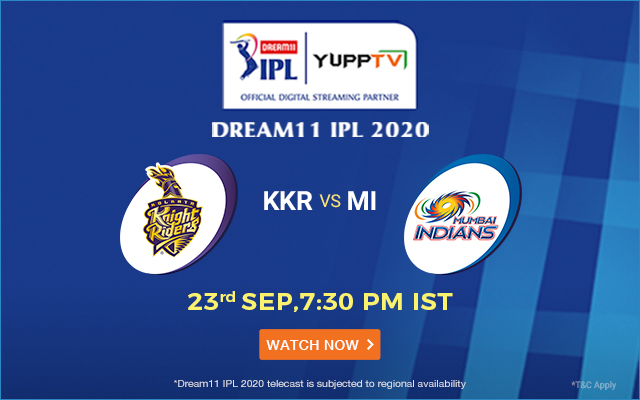 The fantastic Mumbai Indians against Chennai Super Kings match marking the beginning of Dream11 IPL 2020 was as thrilling as any IPL match. With Chennai taking away the victory in the first match, Mumbai Indians had to wait for their second match for their victory inauguration. After a few thrilling battles between Delhi Capitals and Kings XI Punjab, Royal Challenger Bangalore, and Sunrisers Hyderabad and Chennai Super Kings and Rajasthan Royals, the second match of Mumbai Indians is scheduled against Kolkata Knight Riders’ marking KKR’s first match today in Abu Dhabi.

Before diving into the details of the present match, let us take a tour of the history IPL 2020 and how the strongest of teams are performing so far. In the first match between CSK and MI, CSK stole the spotlight by defeating MI. In the second match was between DC and KXIP, the match went on to super over and DC recorded its first victory. The third match was between RCB and SRH and RCB won that battle with flying colors. CSK played its second match against the RR team in the fourth match and lost it to the RR team.

Teams like RCB, RR, and DC have performed so well that the best-considered teams like SRH, CSK, had to lose because of small mistakes. Owing to this logic, it might be helpful for the Mumbai Indians to consider the team as a threat and play the match flawlessly.

Despite having Rohit Sharma at the top and players like Quinton de Kock, Hardik Pandya, Chriss Lynn, Jasprit Bumrah, Trent Boult, etc., the MI team lost their first battle against CSK in the inaugural match. The team had scored a good total of 162 but failed to defend it leading to their defeat. Rohit Sharma has always been a reliable captain willing to learn from his mistakes and lead the team forward. MI winning the IPL Trophy is a classic example of this leadership. The team might learn from its mistakes in the first match and use it as ammunition in the match against KKR today.

Kolkata Knight Riders are playing its first match today against the four-times champions Mumbai Indians. The team comprises of fantastic players like Andre Russell, Eoin Morgan, Lockie Ferguson, Dinesh Karthik, Kuldeep Yadav, Pat Cummins, etc., who are some of the best players of all time. Andre Russell and Sunil Narine are known for their destructive batting skills on the ground and players like Pat Cummins and Kuldeep Yadav can take charge of the match with their bowling skills.

It is difficult to predict if the KKR team will find the right mix of players in the first match but it would be a lot harder for the Mumbai Indians to claim their first victory if they did.

Watch the fifth match of IPL “Kolkata Knight Riders vs Mumbai Indians” Live on YuppTV from Australia, Malaysia, Sri Lanka, Pakistan, Continental Europe (except UK and Ireland), and South & Central America, South East Asia (except Singapore), and Central Asia. You can watch the entire Dream11 IPL for Free on YuppTV by subscribing to any of the yearly packages.